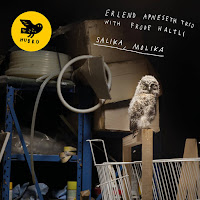 This album is quite different from what I expected. Maybe I should have done some research before I pushed play. Then again, sometimes it is more rewarding to approach an album unprepared or simply ignorant.

Erlend Apneseth is a young master of the Hardanger fiddle player. From what I can deduce, he is the vanguard of the instrument and maybe even the chief proponent of marrying it with modern experimental music. Accompanying him are other practitioners of traditional instruments - Frode Haltli on accordion and Øyvind Hegg-Lunde on percussion – and the less traditional - Stephan Meidell on samples and electronics. Pull them together, and you have the rooted but foresighted foursome that recorded this curious album.

I use the word “curious” as a complement. The music on Salikda, Molikda is developed and clearly comes from somewhere, but I am not familiar with its immediate inspirations. It is eccentrically poppy but harkens back to Nordic folk melodicism and ambiance. As much folk music does, these songs involve simple melodic structures around which the Apneseth and company improvise within certain melodic and scalar parameters. Meidell’s percussion is heavy and entrancing. His interspersed atmospherics and backgrounded bells, clicks, and whistles add depth and a disorienting modernism. Haltli and Apneseth meanwhile produce the plucky melodies and the billowing improvisations that dance upon the platforms laid by Hegg-Lunde and Meidell. Tracks such as “Takle” are jaunty, clattering dance numbers. “Salika, Molika” sounds almost medieval, even with its ghostly overdubbed vocals and its disorienting flow. “Kirkus” sound like a Masada String Trio interpretation of the village fair scene at the beginning of The Cabinet of Dr. Caligari. Other tracks, such as “Mor Song” with an overlaid monolog reminiscent of Philip Bimstein’s “Larkin Gifford’s Harmonica” and the pastoral “Solreven” (I can hear wisps of Danny Boy in this piece) are more pensive and mournful. The final track, “Kierkegangar,” is particularly emotive in its wafting harmonies and plodding drums that give way to a shimmering soundscape.

Much of this album brings to mind Sequentia’s recordings of early Nordic music, even if the pulsing drums – for the battle field, the communal hearth, the mead hall, or the disco – somewhat belie that comparison with modern, danceable rhythms. In other words, something quite different is going on with Salika, Molka. It wears its roots unapologetically, but also quite effectively blends them into a contemporary vernacular that is, well, curious. I can parse out many of the elements, some of which on their own might sound like mere novelties. But those elements compound. At a little over thirty minutes, this album is short, but it has held my attention and curiosity for a couple of weeks, now, and will keep me listening for many more.

I am hesitant to make too broad of statements about the uniqueness of the music. It is possible that there are other combinations exploring similar musical territory elsewhere in Scandinavia. If there is, however, I haven’t come across it.

I picked up his earlier Det Andre Rommet just because I saw it on sale and I've always liked the label. It was a very pleasant surprise and I gave it quite a few listens. This sounds like he's extended the ideas since then so should be worth a buy.

Thanks for the review, Nick.