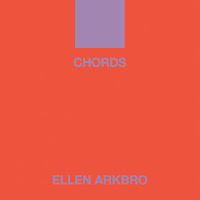 Ellen Arkbro gifts two compositions lasting half an hour on CHORDS . Whereas the sublime For Organ and Brass featured the familiar trio of Elena Kakaliagou, Hilary Jeffery, and Robin Hayward alongside organist Johan Graden, Arkbro performs her own compositions here, alone, on organ and guitar. She continues to plumb the depths of tonal, timbral, and harmonic aspects of instruments - with jarring singularity - and an emphasis on space over time. The result can be surreal.

“CHORDS for organ” begins with a chord, on an organ. After some time, there’s another chord. And that’s it. Surficially. Focus reveals the many sonic lines comprising each chord. Held and allowed to decay, the lines pulse and throb like diffracted air in heat. The waves seem to resonate and harmonize with each other, creating new timbres. When another chord sounds, the waves also amplify and accelerate and the various lines at various pulses create a kind of polyrhythm. The glacial pace of sounding between chords eliminates any sense of forward movement, of musical time, and the track instead feels like a framed space. The effect is similar to watching fireworks in slow motion: a void illuminated by expanding spheres of color in fact composed of squiggling lines that blend with other bursting spheres of color, like Kandinsky’s Several Circles in three dimensions, briefly, before fading completely.

“CHORDS for guitar” contains a similar macrostructure but, whereas the tones of organ chords are pressed almost simultaneously, the tones of guitar chords are strummed more discretely, particularly at the pace of Arkbro’s performance. And whereas chords can sound simultaneously on an organ, the guitar is more limited. The identity of each chord is apparent when first strummed but disintegrates to its individual parts in time, and a kind of hyperawareness of sound waves sets in as high-frequency tones peel away and low-frequency tones hum along, creating a trancelike pulse through the track. Arkbro’s attack is often as consistent as a harpsichord but occasionally, subtly emphasizes the bass or the tenor ends. The timbre is reminiscent of This Heat’s spindly sound. The effect feels more linear, more austere, and perhaps less immediately appealing than “CHORDS for organ” but is cognitively pleasing as a kind of simultaneous foil and companion to it.

CHORDS revels in the details of timbre and is suggested for listeners that do the same. With a simple approach and a slow pace, Arkbro brings focus to intrainstrumental dynamics in a way that makes these chords scale within and beyond what they are. A kind of enlightened understanding of the forest gained from wandering among the trees.

CHORDS is available digitally, on CD, and on LP.