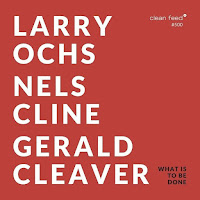 When three high-caliber musicians meet for the first time as a trio—and they have resumes the likes of Larry Ochs, Nels Cline and Gerald Cleaver—there’s sure to be some avid interest, and in this case there’s added significance in that this release represents the 500th album brought forth by the venerable Clean Feed label. But as with all free-improvisational outings, sometimes the results aren’t quite sufficient to meet the lofty expectations. Even the record’s ambigauous title, What Is To Be Done, which could either be viewed as a declaration or an open-ended question, is a hint, perhaps, that the music here hasn’t quite found its purpose, despite the episodic moments of magic that do appear.

These guys aren’t strangers to one another. Cline brought his electric guitar wizardry to saxophonist Ochs’s magisterial Electric Ascension Live, a vital revisiting of Coltrane’s landmark Ascension recording, while Cleaver and Ochs recently teamed up on Songs of the Wild Cave (Rogue Art, 2018), a drums-sax duo album. Here the three come together for three improvisations: two lengthy ones at over twenty minutes each, with a shorter six-minute piece, “A Pause, a Rose” sandwiched in between.

It’s clear from the outset that the trio is on a mission to rock out. Anyone familiar with Cleaver’s output knows that he can bring the goods when it comes to a fearsome rocking intensity—witness the Black Host’s Life in the Sugar Candle Mines for evidence. But here it’s even more pronounced, with Cleaver offering a shifting series of steady, granite-solid rhythms designed to instigate and support the contributions of Cline and Ochs. From the opening moments of the first track, “Outcries Rousing,” one can appreciate Cleaver’s ability to establish a deep groove while Ochs joins in with some bluesy figures. Cline too offers chunky riffs to nice effect before dropping out to let Ochs and Cleaver do their thing for a while. And that’s all to the good, until Cline comes back in—and that might be the first sign of trouble, as Cline starts to bring a heavier, grittier sound from that point onward, and Ochs seems to start to lose his place in the conversation. Which is not to say that Cline is not terrific: the bag of tricks he’s able to bring to bear throughout the album is at times astonishing. His looping technique alone is a marvel, at times suggesting the presence of two different guitarists. But it’s not always commodious enough to make room for Ochs in the way that one would like, especially once Cleaver and Cline go into overdrive mode, as they frequently do on the record. Ochs, to his credit, does his best to find his footing, and he’s not shy about jumping into the fray. He offers plenty of feisty energy himself. But that isn’t quite enough to make the music a true three-way conversation.

Part of the problem lies in the mixing of the album. Rather than situate the three musicians in clear distinction across the listening field, Cline and Ochs are put together very closely in the center, with Cleaver spread out over the left, center and right channels. This blurs the differences between the players, making it even harder to hear the music as an exchange of ideas. Moreover, when Cline really brings the heat, as happens midway through “Outcries Rousing” and elsewhere, Ochs is in danger of being subsumed beneath Cline’s distorted onslaught. More openness and equity in the mix all around would have helped a great deal.

Ironically, it’s on the shortest track, “A Pause, a Rose,” where the potential of the trio is suggested most enticingly. As Cline begins with some entrancing figures that loop and wind around each other, Cleaver waits until just the right moment to enter with some delicate cymbal work, leading Ochs also to contribute with some felicitous flurries and cries. And when Cleaver does eventually find the groove that drives the rest of the track, the trio’s chemistry is enhanced rather than buried beneath the rhythm. There are other moments of a similar nature at various points on the album; for instance, the closing minutes of “Outcries” are riveting, as Ochs merges beautifully with Cline’s looping filigrees to create a captivating conclusion to the track. But nuances tend to be in short supply on the closer, “Shimmer Intend Spark Groove Defend,” where Cline’s outsized presence once again comes to dominate the proceedings, Ochs’s heroic efforts to keep up notwithstanding. Here too, a bit more subtlety and balance might have gone a long way.
Paul on Saturday, August 24, 2019
Share