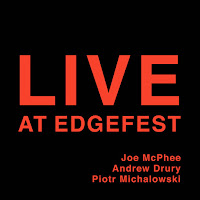 Edgefest serves as one of the larger American Midwest's avant-garde jazz festivals. Since 1997, the Kerrytown Concert House has provided an up-close and personal listening experience through this now four-day long festival. Its popularity, support, and collaborations have continued to grow in recent years. In 2017, Joe McPhee, Andrew Drury, and Piotr Michalowski performed three improvisations that have finally met my ears nearly two years later. Joe McPhee is no stranger to me, and while I have not heard Drury's music, I know that the two have played with each other before. Michalowski resides in Ann Arbor and besides being a self-taught horn player, he teaches at the University of Michigan and writes for the Ann Arbor Observer. So this setting and player arrangement was all new to me, and I was determined to go in with little expectations and to really listen to the interactions the players had with each other.

"Improv 1" is the meat of the album, spanning eighteen minutes compared to the other tracks, which don't even equal that run time when combined. I found myself listening closely to every sound that was carefully made. Drury really uses his drum set like a canvas, painting beautiful strokes of different colors, but also able to ease into steady rhythms that push the other players to the forefront. Drury appears very confident in the space he inhabits and plays using a variety of techniques; going on textural excursions and then immediately after I hear him exploring different grooves that would fit perfectly on Sun Ra's Space Is the Place. Traversing through multiple routes within the jazz tradition, Michalowski is memorable and very often melodic. The first few minutes reminds me of McPhee's presence and reputation as a jazz giant. Through that pocket trumpet, he stretches out every sound that could possibly be made by such an unimposing and underutilized instrument. The breathy playing takes on a natural and abiotic component within the music, almost like the wind. The three players gracefully display their deep knowledge of jazz music and its ever-changing styles, while creating something completely new and engaging through pure improvisation.

"Improv 2" is perhaps a further exploration in that direction; the first two minutes being Drury developing a theme and then breaking it down, rebuilding it with different textures. The drums are busy and robust, barely allowing any room to squeeze the horn players in. When McPhee arrives, he blows his way through any preexisting barriers. I truly am a sucker for baritone saxophone and Michalowski scratches that itch of mine perfectly on this track. When he starts up after McPhee's frenzy, he decidedly takes the music to a cooler, ominous place. The drum patterns change, adjusting to this newly uncovered atmosphere. Right when it's about to come to a close, McPhee joins back in; the two voices increase their pitches, searching for some escape while the drums hold them back. Out of the three pieces, this seems to be the most "conventional" and accessible for listeners who may not be accustomed to this musical form. The third and final improvisation goes into more unexplored territory; more in tune with the musical styling of free improvisation players.

There are few sounds at first, but at about two minutes in I could feel something brewing. The horns are bubbling, shaping a stream of sound that is stopped by a squeaking dam. The light tapping from the drums signal a shift, as McPhee's pocket trumpet wails and allows a small voice to escape. Michalowski enters with an underlying, shaky melodic line that combines with Drury's pulsing rhythm; at times it sounds very Middle Eastern. In one terrific move, the music evolves dramatically into textures that sound unlike any instrument and played by none other than Joe McPhee. The trills are abrasive and tantalizing and I have absolutely no clue how he does it. While McPhee's playing is fairly subdued throughout this whole recording, this last minute takes me to the extremes he sometimes reaches. This release has stayed low-key and the audio quality somewhat shoddy, really requiring some good headphones to hear all the intricacies. Besides that, it's a sublime sliver that showcases these artists' talents and should be listened to with receptive ears and an open mind.