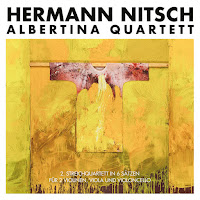 Hermann Nitsch (born in 1938) is an Austrian, avant-garde multimedia artist, and known as the founder of the confrontational Viennese Actionism. His own total, large-scale and highly dramatic approach - encompassed as the Theatre of Orgies and Mysteries - developed since the late fifties and is performed in variations through today. These theatrical-archaic performances call for all our senses. Often Nitsch would begin with painting, but soon his work would involve pagan-like, ritualistic performances, sometimes even including a sacrifice of livestock and splattering its blood and intestines on the paintings as well as on the naked bodies of the participants in these performances, alongside music that he composed and often played on the organ, and conclude with a feast.

Albertina Quartett, the premiere of Nitsch’s String Quartet No. 2 (in 6 movements for 2 violins, viola and cello, performed by the Koehne Quartet) was recorded on May 29th, 2019 in the Viennese Albertina museum and coincided with Nitsch’s retrospective exhibition in Albertina, Spaces of Color. The exhibition showed Nitsch’s paintings, which conquered walls in an overall manner, and intervening in spaces in the form of comprehensive installations. Albertina Quartett is the fourth album of Nitsch’s music released by the Viennese Trost label, beginning with Musik der 25. Aktion (2016), a re-performance of Nitsch’s 25th Aktion from 1968, recorded in March 1982 at the gallery Pakesch in Vienna.

Nitsch does not compose his music in a conventional notation, but divides the movements of his compositions into 1-minute segments and defines the sonic events with great precision - the duration, dynamics, actions with words and symbols, tone clusters and noise. The performing Koehne Quartet is comprised by female expats in Vienna - first violinist Joanna Lewis, second violinist Anne Harvey-Nagl, violist Lena Fankhauser and cellist Mara Achleitner.

The 90-minutes of the String Quartet No. 2 are divided to six extended movements, all titles as ‘Satz’, lack the theatrical, ecstatic drama of Nitsch’s orgies, but offer a unique, minimalist. drone-like experience. These first two movements provide an out-of-time, hypnotic, unison kind of statsis, delivered with a sensual and highly expressive intensity. The third, shortest movement changes the course to more tense, confrontational dynamics but the fourth movements deepens again into the hypnotic, unison kind of lyrical, minimalist stasis. The fifth movement, “Sats (Krebs-Landler) 15’” is the most exceptional one. Nitsch mocks the legacy of Viennese dances and composes a cacophonous blend of twisted waltzes that sounds as imposing the dancers to keep bumping and colliding with each other, but with passionate doses of lust. This composition concludes majestically with another minimalist drone, beautiful and sensual and leaves you in an untimely dream state of mind.

Great review, Eyal. I picked this album up over the summer and, although I knew little about Nitsch and his aesthetics, I took to it almost immediately. With the additional conceptual grounding you offer, I think I like it even more. Glad it is getting the coverage.

Thank you for the review. Nitsch has always been this complex principal in my life.I remember in 2003, eyeing the possibility of studying with him, because of my fascination with the ritual aspects, but it was some of the specifics of his rituals that I just couldn't come to grips with that made me turn away and search a bit within a more generalized aesthetic that I could feel more comfortable exploring. This could be done by delving into his writings and scores as well as simple substitution of situational events. I still try to buy what I can of his work because the sound is so transcendent - including this release.