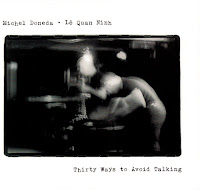 There are many working relationships lasting decades in this kind of music, but one that always springs to my mind is Michel Doneda (soprano saxophone) and Lê Quan Ninh (surrounded bass drum). They’ve recorded together for over three decades now, since the ‘80s, developed their deeply personal styles (often together) in the formative ‘90s, capstoned with two monumental solos in Ustensiles and Anatomie des clefs, and now it seems like everything the venerable duo touch, particularly together, is gold. Despite this perception of the duo, they’ve only recorded together alone on 2015’s Aplomb. Which is weird, considering some of Doneda’s other famous (though more recently founded) duos - with Pierre-Olivier Boulant, Jonas Kocher, Tetsu Saitoh, and Tatsuya Nakatani - are as well-recorded or more.

So this recording is a very welcome document of the duo. It follows Relative Pitch’s release of the solo Everybody Digs Michel Doneda in 2014. 49 minutes of live performance from 2017 are split across six tracks, but the last track was recorded separately from the rest and features Shunichiro Hisada (tzuzumi, voice), who’s recorded with Doneda on his Spring Road performances with Saitoh.

The sound is exactly what those familiar with the duo would expect. Lê works the drumhead with wood, metal, and flesh to evoke the wind and waves of a storm or bending and cracking wood or a warped brass orchestra and works the hoop and shell for skittering communicative pulses, with metallic chimes and clashes too, and sometimes big booming bass strikes, all of which can build into frenzies that sound impossible for two hands, or even 10 fingers, like the taiko-like climax of “The Smallest Sphenic Number.” Doneda draws attention to the saxophone as a vessel of air, with breathy, high-frequency whistles that give way to microtonal purrs and split tones, airy sine waves modulated by twisting with the saxophone or changing the speed of blowing. Sometimes there’s just breath. The saxophone never sounds like a saxophone, but more like a metallic shinobue or shawm. But Doneda is perhaps at his most lyrical here, on “Tricontagon” and the title track. And, though the duo is more comfortable with silence than most, there’s comparatively little silence here compared to some of their previous work. On the trio track, Shunichiro adds a taut-skinned pulse and “woos,” vocalizing the persona of the wooshing wind that Doneda harnesses and Lê at times mimics.

It’s exactly the scratch needed for a fan’s Doneda-Lê itch. As of now though, I don’t hear how this expands the vocabulary of or illuminates new pathways for the duo. An excellent record and an excellent companion to this year’s also excellent Doneda/percussion duo, A Peripheral Time, with
Mathieu Bec.