A Conversation with Mette Rasmussen 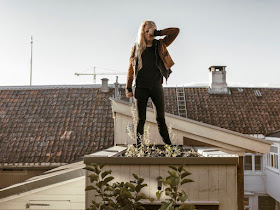 
In this special guest post Fabricio Vieira, who runs the Brazilian music blog www.freeformfreejazz.org, interviews saxophonist Mette Rasmussen, who is currently playing in Brazil, appearing in São Paulo on the 13th and 14th of September.

Farbricio Vierira: You have a very personalized sound ... what did it take to develop that sound? Did you take lessons? Did you find it through practice?

Mette Rasmussen: I did study quite a lot, yes. At schools and at the conservatory. And I took lessons outside of school as well. All a melting pot of components, that led me to how I play today. I think the real shift came, when I started touring a lot, playing in different bands and line-ups, and playing shows night after night, were my embouchure developed a lot because it had to. Also I am really fond of practicing on my own, as well as neerding out, when I have the time. I bring a few books for practice on tour with me, to study when place and time allows it. I used to practice a lot, especially right after school ended. That seems to be all I did for a year or 2, lots of hours a day. Working on sound, and technique, and preparations. I used a lot of hours, and still do, on long notes and overtones. The Holy Grail of Sound.


FV: This is the first time have played in Brazil. You are playing solo and with Brazilian artists (Rakta and Bella). What are the expectations for the tour?

Mette Rasmussen: This will be extremely exciting, I don’t really know what to expect, other than I am looking really forward. But I often find not knowing, to be when the most exciting things happen, in the meeting of the unexpected. At that point all your senses is wide open, and there is less or no anticipations. And often new impressions then becomes extremely strong. I am looking very much forward to be playing in a first meeting with both Rakta and Bella. And to be in Rio as well, playing a solo set at Audio Rebel and recording with local musicians. I was once in Rio, many years ago. Studying samba for some weeks. But that is a long time ago.

FV: From your earliest records, with Saft and Riot Trio, you have been working with free improv/free jazz. In your musical life, has free music always been present? Or did your interest in music start with other music genres?

Mette Rasmussen: I didn’t grow up in a musical environment, apart from singing along to the radio with my sister and mom, so in one way music was present in my childhood. To seek out things, I went to the local library and looked under the jazz section, where I would find my first influences. First jazz record I ever put on was Keith Jarrett, Expectations.

In Saft we worked around metric modulations, and both in Saft and Trio Riot we explored the written material as being the catalyst for the improvisations, or the frame around it.

FV: You have played with different veterans and key names in free jazz, but I would like you speak especially of the experience of playing with two: Paul Flaherty and Alan Silva. How were these partnerships?

Mette Rasmussen: Wonderful to see their names in the same sentence, would be great to hear those two play together. Paul I just toured with in the states in July, in trio with Chris Corsano and Zach Rowden joining on the last show making it a quartet. This was only the second time that we played together actually, me and Paul. But we kept contact through the years. I think playing together with Paul, has brought out some new lyrical way in both of us. That happened quite instant. The way the lines will unfold, very effortless. But also for this second time around, we explored even more the power of the two horns together, going into rough and scruffy edge stuff. It has been a while since I played with Alan, but touring with Alan in the past was always extremely insightful and intense in every way, music was engaged and present as so is Alan, Alan would always have more energy than the rest of the entire room, both on and off stage.

Chris Corsano has been an important partner of yours. How did you meet and start playing together?
Mette Rasmussen: We met first time in Oslo, playing the same bill. After that I was in New York, where we were supposed to do a session, but ended up doing a show. Kevin Reilly from Relative pitch was at that show, and suggested doing a record, which we did. That was sort of the beginning, back in 2013. Since then, we toured mostly in Europe, but also Japan, Canada, US and most recently last week in Scandinavia.

FV: His discography is mostly composed by projects in duos and trios. Do you have a preference for small formats? What changes when you play in a big band, like the Fire Orchestra?

Mette Rasmussen: I like smaller formats, but I dont see it as a preference. I do have my own quintet, consisting of two drummers and two bass players. I guess… I have a lot to say, and I like the freedom which a smaller format enables. Larger groups, when it is good, gets to be a small community feeling, which is powerful. Like with Fire! Orchestra, everyone was a family for a little while, and everyone had a big heart for the music that came out of that lineup. So it was a strong community feeling, that you were a part of something bigger, like a movement almost.

FV: What have been the big turning points in your career over the last ten years?

Mette Rasmussen: Definitely touring as much as I do. It has been, so far, a life lesson being on the road this much. It is hard work, living most of the year out of a suitcase. But I experience the music developing in real time. Functioning like flesh and blood…

FV: What type of music do you prefer to listen to at home? Can you name 5 essential albums for you?

Mette Rasmussen: Oh, tough one, I listen a lot of music at home, but all very different. Right now before leaving for Brazil, Marissa Anderson solo was spinning, and a Japanese folkway record.

FV: What else are you involved with at the moment and what are some of your future plans?

Mette Rasmussen: Right after Brazil, I will be doing a project with The Trondheim Jazzorchestra, Ole Morten Vågan & Cory Smythe, in Trondheim. And then after that, on the road with Norwegian MoE, the band of Norwegian bass player Guro Moe. Later on in October will be in Krakow with Ken Vandermarks Entr´acte Ensemble. November will be a lot of festivals, such as Wels Unlimited with Joe McPhee´s Special Quartet and at Berlin Jazzfest with Julien Desprez and Rob Mazurek´s T(R)OPIC Ensemble. There will be some one off´s, with The Hatch (duo with Julien Desprez) and duo with Sofia Jernberg and at the end of November a 10 day solo saxophone support tour, for Canadian Godspeed You! Black Emperor in Europe and Russia. All of which I am looking very much forward to!