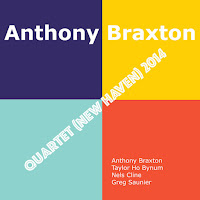 Producer, engineer, and Firehouse 12 proprietor Nick Lloyd and his partner composer/trumpeter Taylor Ho Bynum have been responsible for releasing some terrific music over the last decade plus via their Firehouse 12 record label, including instant classics by the likes of Myra Melford , Mary Halvorson , Tomas Fujiwara , Ingrid Laubrock , and of course Tyshawn Sorey whose Pillars on FH12 was voted FJC’s 2018 album of the year. Anthony Braxton has also delivered a couple of excellent sets for the label, 2007’s epically brilliant (and brilliantly epic) “9 Compositions (Iridium) 2006 (12+1tet)” and 2016’s “3 Compositions (EEMHM) 2011” the latter of which was recorded in-house and mixed + mastered by Mr. Lloyd himself. Braxton’s latest on Firehouse 12, “Quartet (New Haven) 2014”, finds him matched up with trumpeter Taylor Ho Bynum, guitarist Nels Cline, and drummer Greg Saunier in June where they pay homage to some of Braxton’s favorite popular music artists in four varied and intense hour-long improvisations of carefully rendered give and take. This monster four disc set is the product of a two day recording session at Firehouse 12 arranged by Bynum at Braxton’s request after he had seen (and been blown away by) a Cline/ Saunier duo set during the Willisau festival in 2013.

For lovers of low register reeds and no wave guitar skronk and/or combinations thereof, this collection offers up a quadruple helping of sputtering, croaking acoustic-electric gruel. The way the story goes is that Braxton had arrived for the sessions loaded up with his full range of saxophones as well as some graphical scores and instructions which he for whatever reason promptly abandoned (the scores and instructions that is) for a more free approach to the improvisations. This decision appears to have two effects on the record. For one, the attentiveness and enthusiasm is top notch throughout the entirety of the recording. Braxton in particular sounds fantastic here, his free playing during some sections sounds totally ecstatic as the maestro loses himself in the moment to unbridled sonic bliss. The second effect is that there isn’t a lot of variation thematically or structurally for such a lengthy collection of pieces. This might make listening to it straight through a bit of a chore for some, and I’ve personally enjoyed it more listening to a disc-at-a-time over the course of a week or so. But I’d like to stress that the intensity and quality of the improvisations more than make up for any apparent lack of structure and I found myself returning to this set over and over again this summer.

Each of the four improvisations included in the set is dedicated to a popular musician that Braxton admires. Here we get dedications to Jimi Hendrix, Janis Joplin, James Brown, and Merle Haggard, respectively. The group combines sections of enthusiastic and intense interaction with unhurried explorations of space and timbre, sounding relaxed and engaged throughout. There are a multitude of ideas expressed in each piece as the quartet doesn’t tread on anything for too long and their extensive set of instruments provides for a colorful listen. I’m happy to report that Braxton honks on the big contrabass sax again and again, and every time he seems to stir up the sediment, rousing the group into a whirl of collective activity. He’s similarly devastating across his range of saxophones (everything but the tenor here) and changes horns frequently to complement and/or to disrupt. Likewise, Braxton’s one-time student and long-time collaborator Taylor Ho Bynum employs a range of horns (and mutes I would assume) on these improvisations including cornet, flugelhorn, piccolo and bass trumpets, and the trumpbone. His playing is steeped in Braxton’s language music and can be brittle and squawkish as well as warm and buttery depending on the need. Guitarist Nels Cline is well known in free improvising circles and I’ve always found him particularly exciting and crafty in his playing (there’s a craftsmanship to his amp-driven bedlam that he’s chiseled from years of experience). His use of pedals and electronics is also greatly to my liking and he unloads some really wild sounds across this collection. Of the four, Greg Saunier is the member with which I’m least familiar with. Having never heard his band Deerhoof, the only reference I have in my collection is his trio with Mary Halvorson and Ron Miles on 2017’s New American Songbooks, Volume 1 which I liked very much and intend to revisit soon. This is a different pairing altogether though, finding him to be a powerful and versatile drummer with exceptional stamina. “Quartet (New Haven) 2014” is a fantastic addition to the Firehouse 12 catalogue and it’s an exciting and worthwhile listen that fans of Braxton will be glad to dive into head first.