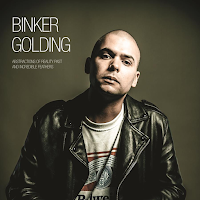 Binker Golding is a musician who has grown and developed in many areas over the past few years. He has shown himself to be a skilled composer, an educator at Tomorrow's Warriors, a collaborator with musicians including Moses Boyd, Frances Tandy, Evan Parker, Elliot Galvin, Gilad Atzmon and many others. He has conducted the NuCivilisation Orchestra. His main projects include the free jazz duo Binker & Moses. The pair scooped up a MOBO award for their debut album ‘Dem Ones’(2015) as well as two Jazz FM awards and a Parliamentary Jazz award. Their subsequent album ‘Journey To The Mountain Of Forever’ was voted number 1 Urban Album of the Year by MOJO magazine in 2017. Golding’s new album Abstractions of Reality Past & Incredible Feathers was recorded at Abbey Road, mixed by the legendary James Farber (Michael Brecker, Joe Lovano, Brad Meldhau), and mastered at Gearbox Records. Due for release on the 27th of September, the record features a distinctive quartet with Joe Armon-Jones ( Ezra Collective, Nubya Garcia Maxwell Owin) on piano, Daniel Casimir (Moses Boyd, Shirley Tettet) on double bass, and Sam Jones ( Tomorrow's Warriors, Trinity Laban, Gary Crosby ) on drums. Binker Golding’s quartet project maps a path between the more through-composed jazz fusion of previous decades and the hip hop/brokenbeat-influenced sound of the contemporary London jazz scene.

The CD opens with ' I forgot Santa Monica' which is introduced by strong double bass and gorgeous piano lines over which Binker's sax drops and immediately something special is in the air. There is a confidence in playing, a strength and perfect placement which makes Binker Golding's sax stand out. Every note is forged, blasted and sounded out with certainty- something which is rarely heard now in more conventional jazz playing. This track is a show piece of Binker's playing and his technical ability. The piano interlude from Joe Armon-Jones is strong, impressively delivered and Armon-Jones gives full rein to his keyboard covering skills. ' Exquisite-She Green' is slower, with a heaving, mesmeric 2/4 rhythms interspersed with triplets which add another dimension to the sax line. There are some lovely changes in style and rhythms across this piece, ably reflected by the empathetic responses from the drums and double bass from Daniel Casimir is at times exquisite. The number builds in volume and textures towards it closing stages, aided and supremely abetted by the drums of Sam Jones. The recurring theme is wonderfully interpreted and changed, not just by Binker but the whole ensemble.

'Skinned Alive, Tasting Blood' is heralded by a bass introduction before the rhythm takes on a sashaying feel with the sax entering introducing an arcing, topping out line. This track has an old fashioned delivery to it, the support offered to the sax solos impressive and exacting. The off-beat emphasis in the intermissions is intriguing, as is the deft percussion line and the stellar tenor reaching out over some impressively tight support and an interesting piano part, which at one point goes gloriously out of kilter which makes it all the more wonderful and clever.

'And I Like Your Feathers' is cheeky, verging on the sleazy but endearingly listenable, with Binker altering the volume in subtle manner to make it feel like a living , breathing thing. There is a great bass solo from Daniel Casimir and the track has a dance-band feel. 'You, That Place, That Time' is 15 and a half minutes of interesting, listenable music with some great playing from Binker and several great solos. The middle section has deft rhythmic variations and the band switch from dangerously verging on the mundane delivery to interesting and diversified switches and changes. A gentler episode altogether , allowing adequate room for development and exploration - and another glorious piano-led section. 'Strange, Beautiful, Remembered ' is both the first of those three. It is a strongly delivered and well arranged number . Once again a dexterous and perfectly placed piano section is supported superbly by the bass and percussion and the sax is powerful, each note sung out with the musical lines make wonderful rainbow arcs over the top. The second half of the track sees interesting sax lines and precision percussion and the clever but subtle key interchanges provide ear-twerking interest. 'Fluorescent Edges With Black' brings thoughts of big band performances, with great backing, good solos and then you remember there are just 4 musicians here. There is an uplift and energy throughout this track, culminating in the soaring sax solo which soars and sighs over the persuasive bass line of Daniel Casimir.

I think with this album Binker Golding and company have delivered something special. It is not very different, it is not exceptional in compositions or arrangements but it is strong, clearly marked out and decisive. There is a sense of many references, many links to the past and some links to modern styles with an emergent pervasive individual identity. Binker Golding showcases the talent with which he surrounds himself on the album and the recording allows plenty of space and freedom to these players. There is much repetition of melody, a lot of the same style and it feels very safe at times but it has innate quality. The label feel this is exceptional and perhaps one of their best releases to date and I would not argue with that.