Prolific pianist Simon Nabatov was born in Moscow, Russia, sixty years ago and although he left Russia forty years ago and a decade later settled in Köln, Germany, his great passion for Russian literature never subsided. Nabatov has already released for Leo Records three brilliant albums that introduced some of the heroes of the Russian avant-garde counter-culture. His quartet album, Nature Morte (2001), was based on the poem of Russian-American poet Joseph Brodsky, who was expelled from the Soviet Union in 1972. His quintet album, The Master and Margarita (2001), was a inspired adaptation of the classic book of Mikhail Bulgakov, a book that was written during Stalin’s regime but published only in 1967, first in France and later its manuscript was smuggled into the Soviet Union. On A Few Incidences (2005) his octet performed texts of Daniil Kharms, an early Soviet-era avant-garde and absurdist poet, writer and dramatist, whose children books were considered as “anti-Soviet”, and he was punished with arrest and exile. 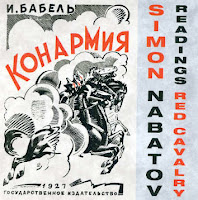 Readings: Red Cavalry is based on a classic book from 1924 by the Odessa-based, Jewish writer Isaac Babel, describing the life of Jewish gangsters in Odessa and the brutal reality of the Polish-Soviet war of 1920. Babel’s style was far from the Soviet utopian propaganda, and he often portrayed the murderous gangsters as the real heroes. Babel was arrested on fabricated charges of terrorism and espionage and was brutally executed in 1940 by the NKVD (the then KGB).

Nabatov said in a recent interview that the literary works he chose to adapt were all by authors who were suppressed by the Soviet government, like his grandfather who was arrested and killed in 1939 as part of Stalin’s political purges, just like Babel. This formative experience shaped his own aesthetics, and especially his interest how artists and writers were dealing with political suppression.

Nabatov arranged segments of the Red Cavalry book as a dramaturgical narrative of theatrical cycle of songs that projects the disturbing, scary, and horrific atmosphere encapsulated in Babel’s short stories. The free improvised setting of the pieces - performed by vocal artist Phil Minton and reeds player Frank Gratkowski, who both have worked with Nabatov on Nature Morte and A Few Incidences, electronics player Marcus Schmickler, and drummer Gerry Hemingway - cements this unsettling yet highly emotional atmosphere.

The first song “Crossing The River Zbrucz” already sets the subversive atmosphere. Its arrangements deconconstructs Soviet propaganda song, sung by a male choir, into an ironic, free jazz improvisation. Minton acts-recites-sings Babel’s texts with natural charisma, grace and compassion but also with a conviction of die-hard activist against all wars and all forms of political oppression. His sober delivery strips the utopian Soviet lingo from its self-righteousness and puts its zealous ideology in grotesque and macabre perspectives. “Gedali” is arranged as en emotional klezmer song, emphasized by the voice of Minton who mourns “yesterday’s revolution” and realizes that it was led by “bad people”. Hemingway’s playing on “The Tachanka Theory”, “My First Goose” and “Intermezzo 2” is truly imaginative, offering ironic abstraction of military marches on the first and a poetic rhythmic orchestration on the latter two.

This albums revisits some of the poems and texts of the Moscow-based circle of artists Gileya (often called Hylaea) who were part of the pre-revolution Russian Futurist movement from around 1910, known for their manifesto, "A Slap in the Face of Public Taste." Poet-actor-playwright Vladimir Mayakovsky was one of the prominent figures in this movement that resonated other revolutionary artistic movements around Europe as Dada, Italian Futurism, English Vorticism and French Surrealism. The writers and poets of Gileya rebelled against the romanticism and realism of writers such as Alexander Pushkin, Leo Tolstoy and Fyodor Dostoevsky, and claimed that they “should be "heaved overboard from the steamship of modernity”. Also, there is no real difference between words and images. According to Gileya, poets should arrange their texts like a painters do, discarding logic, grammar or syntax and welcoming neologisms, profane words or onomatopoeia, that was declared as the universal texture of verse.

Nabatov arranged Readings, Gileya Revisited as a suite of contrasting abstract and absurdist texts, art songs with strong melodic core and even wilder free improvisations in order to capture the spirit of these adventurous artistic movement. Blonk was the perfect choice for this project as he already interpreted dadaist classic works with great success (Kurt Schwitters: Ursonate, BVHAAST, 1986, Flux de Bouche, Staatplaat, 1993, and Hugo Ball: Sechs Laut-und Klanggedichte, 1916, Balance Point Acoustics, 2014). Blonk makes these Russian texts his own with his inimitable delivery, being dead serious and totally ironic at the same time.

The wild drama of Readings, Gileya Revisited begins, naturally, with the “Manifesto” of Gileya, co-authored by Mayakovsky , The texts and poems call for eccentric gestures and totally open interplay, and Blonk, Hemingway and Gratkowski clearly enjoy charging these subversive pieces with the healthy doses of the anti-authoritative spirit of free jazz or free-improvised music. “Dyr bul shchyl”, for example, by poet Aleksei Kruchenykh, using the experimental-symbolist Zaum language, which, according Kruchenykh, is "more Russian national, than in all of Pushkin 's poetry", is transformed into passionate and very playful dadaist drunk song-dance. Gradkowski's flute on “Momentwills” spirals the Russian text to the universe of cryptic Zen haikus. Nabatov arranges “Shokretyts” as the emotional center of this suite, a melodic and playful song that even its Zaum lyrics capture its gentle, optimist spirit. And just to remind as where it all began, Schmickler and Hemingway arrange some of the original recordings of the Gileya poets as a chaotic yet colorful tapestry of electronic noises and poetic drumming on “Intermission 3”.

I really applaud Nabatov doing this. I listened to Master and Margarita while reading the fantastic book and it added a level of enjoyment..

I'm glad Nabatov is inspired by these literary works which might bring them to the attention of additional people who are open to their artistry. I listened to The Master and Margarita as I was reading it and it added an extra level of enjoyment.