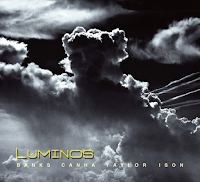 On a recent and, for me, rare trip to NYC, I visited the Downtown Music Gallery for an in-store performance. While the trio set up, the long-time proprietor, Bruce G., had an amazing record playing: A tenor saxophone with the timbre of rough-cut wood, a careful but decisive piano, a drummer using bells and a bowed cymbal, and a plucky bass. It felt loose and tight at the same time. It sounded fully improvised, but so complete unto itself it all felt right and easy. After five or so minutes, the speakers cut so the live band could start—but, I had to know who made that beautiful music coming over the loudspeakers. For music it was. Not a mere exploration of sound or rhythm; not an ego-trip for any or all of the musicians. This was a complete work; it just had that sound. The band sounded focused, like all intention was unforced and collected together into a single, organic thing. So, anyway, I bought the record.

I recall reading or hearing a story— whose story was it? I no longer remember— of when Kind of Blue came out, and this person, having listened to the first side, for years couldn’t bear to play the second side in case it detracted from the first side’s perfection. Having got Luminos home, I felt a bit the same, except I didn’t know which tune I needed to hear. I wanted that track from the Downtown Music Gallery on repeat. Turns out the whole record deserves to be on repeat.

Luminos is a quartet outing: Josh Ison on tenor sax, Dan Banks piano, José Canha on double bass, and Trevor Taylor (who runs FMR, (Future Music Records)) on percussion. In a certain sense, Ison is the lead voice on this record (he played with Henry Grimes and Gerald Cleaver on a very fine, fully improvised record Perceive React (F-ire, 2016), but wisely his saxophone here is not so far out in front of the mix that we lose the magic wholeness of this quartet (though maybe Taylor’s drum kit is under-represented at times).

The first track , “Luminos Sky,” opens gently with some patient, probing and then lush piano and bass. At the 2-minute mark the true flavor of the disk kicks in when the drums and sax enter. Now we have four masters doing their thing, where the whole is oh-so-much greater than the nonetheless very great parts. Spaciousness turns into energetic sax runs. Ison plays tenor in a way where every tone gets its due, even when he’s sprinting. His tone is inviting, lush, just a bit breathy, a nice combination of smokey and edgy. Like speaking with a rasp and a crooked smile. Very musical. The piece moves from calm to bedlam, to mildly swinging, and then somehow the piano/sax/drums each invokes a separate world which nonetheless overlap to make something else. Remarkable, really. At the 8:50 mark the band breaks down into more reflective individual statements with lots of space, cymbal and bell hits, tenor sax multiphonics and subtoning. The piano takes lead once again, and out.

The second piece “Luminous Cloud” opens with a gentle hand strum of the piano strings, some cymbal scratching and bar chimes, slowly wrought tenor sax multiphonics. The pace is ruminative. The bowed bass and the sax timbre provide just enough edge to prevent the thing from turning one dimensional. At 4:17, Taylor drops some percussion bombs which suddenly opens up the piece for the others to work with sound (and not just patterns).

“Luminos Night,” the longest cut (24 minutes) shifts seamlessly through many musical modes: sultry tenor, super responsive percussion and bass interaction, spaciousness, jutting and then gentle piano, and near the end, a walking bass line and a brief throw at nu-bop. It is all thoroughly enjoyable, not least because the whole thing is not a swinging affair. There are moments of pure calm–tenor tone against ride cymbal and slowly laid down piano chords, like day-dreaming out loud.

The final tune (and the briefest at just under 8 minutes) “Luminos Light,” opens with a low, repeated bass figure. The bass starts to veer, and tones emerge from plucked piano strings Imperceptibly the saxophone enters in an upper register and then bar chimes splash. Now they are all at it, but slowly, in long draughts. The perfect cymbal tap at 3:21. Gently the piano takes the lead in careful, stepped clusters. The tenor snakes up front with quiet long tones over piano plonks and hand drumming on the kit. The song and CD fades out – but if you have on repeat like I do, it will begin again and you’ll hardly know it.