Percussionist Claire Rousay had a prolific, style-defining 2018, releasing or contributing to ten recordings, culminating in the personal, distinctive solo Neuter. Rousay continues to grow and thrive in the solo setting this year, releasing four so far, two of which are covered here. 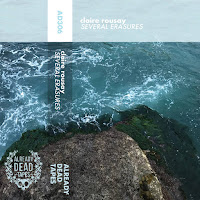 Several Erasures is a solo percussion soundscape lasting 37 minutes across four tracks that furthers the direction of Neuter. The hiss of recorded silence ensconces a ball bearing rolling in a mortar like a cat toy, woody clicks reminiscent of Hayao Miyazaki’s depiction of kodama, persistent jingle bells recalling Julius Eastman’s compositions, resonant meditative chimes, bowed metal, crumpling, something rocking on the drumhead, something like the strike of a grandfather clock, skinwork that sounds like circling the drain, scratching, flaying. Most of the action is not perpendicular to the drumhead. When it is, hi hat and kick drum accompany snare strikes in a rising, syncronised pulse. Rousay is a master of the kit’s palette.

But what’s most striking is the mastery of space and time. Rousay often allows sounds to decay into the silence. When soundings do occur together, they often appear distinct, and any rhythm they result in feels natural and fortuitous. The effect makes Several Erasures seem less like intended music and more like a field recording of a child at play. Not a child in the sense of immaturity, but rather unbounded by convention. It reminded me of the freeing and framing silence of Polly Bradfield’s Solo Violin Improvisations, though this is much less silent.

Several Erasures is available digitally and on cassette.

It Is Just So Much More Difficult (Falt, 2019) is another solo recording in a similar vein to Several Erasures. More traditionally percussive, though with more exaggerated silences, and features an interval of ringing bells, chimes, and cymbals that feels like some transcendent gamelan. 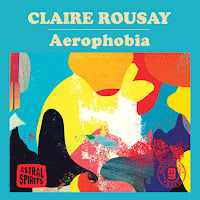 6 tracks divide 35 minutes of solo percussion recorded in 2017 on Aerophobia. The earlier recording date makes Aerophobia feel like a time capsule, due to Rousay’s rapid development, and the style present here is much more akin to last year’s Divide than Several Erasures or Neuter. Most tracks contain textural moments - mostly fluting cymbals or the drumhead - but the meat of each track is nearly always cool, fast tricks building in tempo, volume, and density into multi-limbed polyrhythms of perpendicular hits. It recalls the physical, yet colorful, onslaughts of Chris Corsano or Tatsuya Nakatani. It’s a treat to listen to, and there are moments where I thought “I didn’t know the human body could do that,” but this doesn’t appear to be the direction Rousay is moving towards.

Aerophobia is available digitally and on cassette.

Rousay has also self-released the two tape collages of a moment in st louis and a moment at the beach and appeared on the compilations Infinite Futures (Full Spectrum) and Free Percussion (tsss tapes) this year, sharing the roster with Tim Daisy, Will Guthrie, et al. on the latter.
Paul on Sunday, September 29, 2019
Share