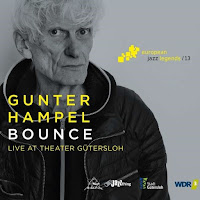 The Freejazzblog so far never reviewed an original recording of Gunter Hampel. This is surprising as he is one the founders of free jazz in Germany if not in Europe. In 1964 the record “Heartplants” by Gunter Hampel Quintet did introduce a new form of European jazz liberated from conventional bebop structures. Players like Manfred Schoof and Alexander von Schlippenbach were members of the group. He moved to Holland and then the US and continued to work with international players like Jeanne Lee (his later wife), Willem Breuker and Anthony Braxton (“The 8th of July” Birth records). Marion Brown and Perry Robinson were further international long-time partners. Most of his recorded output appeared on his own label Birth Records, first on LP, from the 90s on CD and in the last decades on CDr / DVD / Blueray – a step intentionally done to keep full artistic control. Especially the very Do It Yourself method of the produced output in the later years can be a reason why there has not been any coverage in the Freejazzblog. One also has to admit that some of the younger recordings do not always fulfill audio expectations.

Here we have a professionally produced concert with recordings from 2017, which came out in a series devoted to 15 European Jazz legends who each gave a concert in Gütersloh usually introducing current bands who all came out as CD. Gunter Hampel played with his touring band including two further Germans: Bernd Oezsevim on drums and Johannes Schleiermacher on sax, flute – together the so-called “European Trio” with a long recording history. The group is completed by Cavana Lee-Hampel - the daughter of Jeanne Lee and Gunter Hampel. During the last years I had the chance to listen to several concerts of them in Northern Germany and the group can best be described as a real touring band that never fails to entertain a crowd. Often they are accompanied by Ruomi Lee-Hampel, brother of Cavana who films and records the concerts.

Now to the music: It starts with JOY – the musicians enter the theater from the back, drumming and singing a swinging melody titled “Kindred Spirits” – and the spirit conveys fun. The next piece already demonstrates why his influence on Euro-American jazz is so essential. On “New Waves / 2004” the band gives a jumping, catchy melody, that offers the structure of later solos of the members. The rhythm is liberated, but a continuous pulse keeps the danceable character of the music.

Warhorses of Gunter Hampel's bands follow. “Godzilla” steps in elegantly offering the basis for a single line vibraphone solo by Gunter Hampel (with other part of the records demonstrating that he is to be regarded as one the most individual vibe-player around). The following scatting of Cavana recalls the singing of her mother. This comparison probably is not fair, but in a concert some years ago in Hamburg even Gunter Hampel got confused, presenting her as Jeanne Lee after one of her solos. She, Gunter and large parts of the audience reacted positively with a happy smile on the face.

“Godzilla” is part of many recent concerts and concert recordings. Vibes and drums offer a background for Johannes Schleiermacher on sax. One has to call it a solo, but Hampel’s music does rather aim at collective soloing or at least parallel soloing. Two, three or all four musicians climb around a given melody, creating a modern form of a dixieland group – sometimes marching, often searching, always collective. All musicians improvise listening closely to each other and following the threads of a given melody. Hampel displays his skills also on flute and bass clarinet. Bernd Oezsevim provides a pulsating underground on drums with short outburst demonstrating his skills.

“Bounce”, “Workout” and “Magic Touch” do not offer polished modern jazz. The spirit of the players holds the pieces together. They rub each other. Regions of disharmony are sustained only to join each other in the melody. It is good to have a recent typical concert recording of Gunter Hampel on an easily available and professionally produced recording. A master of European-American Free Jazz is among us and still producing music as good as in earlier years.

P.S. The CD ends with a short interview with Gunter Hampel (in German). The interviewer Götz Bühler tries to give Gunter a platform to talk about upcoming plans for his 80th birthday and mentions possibilities in Göttingen or Berlin. Simple answer: “Berlin”. Interviewer has to start again. Now he just had his 82nd birthday –later concerts were produced on Birth records and were available as radio recordings – “Happy Birthday”!

Hinrich Julius. Born in Northern Germany (Hannover), now again living there (Hamburg). For many years a follower and fan of improvised (jazz) music in its many forms. Spending most of my time working at the university and with wife and daughter, who often have to tolerate the music.
Paul on Sunday, September 08, 2019
Share

Thanks for finally bringing Hampel to these pages. I completely agree that he is a very important and much underappreciated figure in European and US music as musician, bandleader and label owner. His back catalogue is extensive and well worth investigation by anyone with enquiring ears. His musical, and personal, partnership with the great Jeanne Lee runs as a rich seam through this back catalogue.
I still hope he will play in the UK one day.