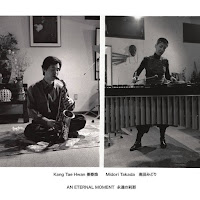 An Eternal Moment is the third in a line of previously unreleased Chap Chap tapes from NoBusiness documenting live performances of alto saxophonist Kang Tae Hwan in 1995, after 2018’s solo Live at Café Amores and 2017’s Prophecy of Nue with pianist Masahiko Satoh and percussionist Midori Takada (the Ton•Klami trio). The 77 minute recording expounds on the fruitful relationship of Kang and Midori, previously recorded in duo format for only a few minutes on Korean Free Music, while also capturing the saxophonist during the chrysalis of his style.

“Syun-Soku” is a ~40-minute set. Kang catalogs extended techniques: multiphonics; overtones; key clicks; gurgling; circular breathing; microtonality; breathwork; possibly voicings and mutes. Midori matches this timbral range by singling out aspects of the drum kit, a muted skin mimicking wadaiko, shimmering cymbals, the snap of the snare. The two players shift these timbral motifs out of phase with each other, unhurried. They instead communicate mostly through tempo and volume. So Kang’s bird chirps share time with both Midori’s wadaiko and cymbals, and Midori’s cymbals share time with both Kang’s bird chirps and key clicks, and so on. There are a few moments in which they sync, amplifying to transcendent, dramatic effect. These moments are typically signalled by Kang building skronky, snaking, spiritual, folky, multiphonic melodies reminiscent of Ned Rothenberg and Evan Parker, or a more petulant, resonant skronk, simultaneously glassy and metallic, like a shawm or buzzing fly recalling Michel Doneda, three players to which Kang often draws analogies and with which he’s recorded.

A kind of collage and personalization of these players’ styles continues in the second half of the fifteen minute “Solo.” It’s a noisier, less smooth, more austere, less jubilant version of his solo style than is present on 2011’s prodigious masterwork Sorefa, Kang’s last recording released before NoBusiness’ series. The first half of “Solo” is reminiscent of Steve Lacy’s “Ducks” - a piece that characterized a portion of the soprano player’s solo career - but in multitudes, frenzied and cacophonous, disturbed to flight.

The sidelong “Dan-Shi” begins with Midori on marimba, with a fluid rhythm that ebbs and flows in volume and tempo, accompanied by metallic feedback from Kang. Following a similar structure as “Syun-Soku,” though with more immediate communication in timbre, Kang transitions to a circular multiphonic honk after Midori transitions to a fully-utilized drum kit, and moves to soulful calls as Midori moves back to marimba responses.

Looking back on how I’ve described this music, it might seem derivative or formulaic. It’s not. It’s something to be heard and felt rather than described. And though it’s pieces may be traceable, the whole is distinct. Midori’s mastery of color provides perfect environments for Kang’s style that is often both playful and soul-wrenching. It’s a strong recording from the relatively under-recorded altoist, and one of the stronger recordings of this year for sure.

An Eternal Moment is available digitally, on CD, and on LP.