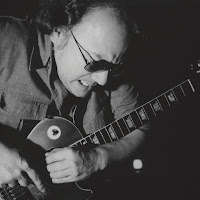 There’s lots of ‘what if’s in life that can lead us to ponder key crossroads in our lives’ journeys and what might have happened if we had chosen a different path, or maybe if a certain event in history had or had not happened. This is a theme, which in itself has inspired a whole genre of alternative historical settings within fictional literature. Within music would things have been any different if Charlie Parker had managed to study compositional technique with Edgard Varese? Who knows? However, these events and moments can be fascinating to ponder over and if nothing else they add to life’s rich tapestry and our experience of it.

Another such event is the time Japanese free jazz guitarist Masayuki Takayanagi was invited to record a session for ESP-Disk recordings, a good conduit for avant-garde jazz at the time, only for the record label to go bust just before it was due to be released. A catalogue number had even been assigned to it! This was planned to be the first of many Japanese jazz recordings that the head of ESP-Disk, Bernard Stollman, wanted to release on the label, which surely would have catapulted the Japanese scene much more into the global picture, than the actual slow underground trickle of awareness that eventually happened, which would have included Takayanagi and friends nestling up alongside the likes of Albert Ayler within the roster. Apparently Takayanagi was publically quite philosophical about the situation, however, the session was buried and it didn’t see the light of day until just before the guitarist’s death. As with all Takayanagi recordings they can be hard to come by, especially if one doesn’t want to pay the over inflated prices that his recordings currently seem to be garnering. It is welcome news then that this particular session has recently been re-released on Black Forms Editions.

For those new to this recording the New Direction Unit consisted at this time of Kenji Mori (alto sax, flute, bass clarinet), Nobuyoshi Ino (bass, cello), Hiroshi Yamazaki (percussion), and Takayanagi (electric guitar). The title of the album, April is the cruellest month, Takayanagi borrowed from the opening line of T. S. Eliot’s poem, ‘The Waste Land’, and consists of three tracks with titles that have also been pulled from the poem. The first ‘We Have Existed’ is a busy and anxious texture with skittering percussion, fast flitting melodic phrases on the flute accompanied by bowed bass strings and streams of feedback and noise from the guitar. The alternate take of this track that has appeared on previous editions of this album is not included, which gives us the album content and listings in the order they would have appeared if originally released by ESP-Disk. The second track ‘What Have We Given?’ being a bit shorter in length than the first, is characterised by some great playing by Mori on the bass clarinet and accompanied by a range of metal percussion sounds, barbed bass lines, and punctuated chords from the guitar which are allowed to ring on into feedback swells at times. The last track, ‘My Friend, Blood Shaking My Heart’ is a twenty minute, full-blown mass projection onslaught, with rapid drumming and nasally screeching guitar to the fore, which continues with much energy, continually and without break for the full duration of the piece.

The liner notes of this release are taken from Teruto Soejima’s wonderful book, recently translated and published as Free Jazz In Japan: A Personal History, and encapsulates some of the text that he wrote for the original release of the album.

So, we can muse upon the alternative historical aspects of this particular musical event and whilst it’s fun to do this within the cultural context, it’s even more important to enjoy the sounds for what they are and live the music in the moment of now. We are privileged to have such a classic and important free jazz work available once more.

- Postscript – Another release, Takayanagi’s Angry Waves “850113” has also just seen a new release on Octave Labs; this is a classic free jazz guitar trio. This recording seems to be much underrated and is an absolute gem! – Probably my favourite Takayanagi recording of all time.
Paul on Tuesday, September 17, 2019
Share