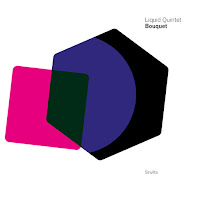 “Fully ‘biodegradable’ structures, starting to disintegrate the moment they have been assembled, are nowadays the ideal.” (Zygmunt Bauman)

The Barcelona based Liquid Trio – Agustí Fernández (piano), Albert Cirera (tenor and soprano saxophones) and Ramón Prats (drums) – was formed in 2011, taking its name from social theorist Bauman’s metaphor of “liquid modernity”: that in the contemporary world our individual, social and political frameworks are in a state of almost permanent flux, spheres in which “fluids neither fix space nor bind time”. The concept resonated with the mutability of musical matter and the trio’s temporal experiences while improvising. There have been three albums to date, all recommended: Primer Dia i Última Nit (“First Day and Last Night”) (Sirulita Records, 2013), Marianne (Vector Sounds, 2016) and The Liquid Trio plays Bernouilli (Słuchaj Fundacja, 2017). Piano, saxophone and drums is not a standard combination but Fernández cites the Schlippenbach Trio as the most direct antecedent. In terms of visceral brio the comparison is apt, with the Catalonia trio having its own distinct, happy-scrappy quality.

As befits its fluidity, the trio has been expanded to a quintet on occasions, as in 2013 with Johannes Nästesjö (double bass) and Julián Sánchez (trumpet). For this latest incarnation it was decided to take advantage of double bassist Barry Guy’s visit to Barcelona in July last year in a session at the Rosazul studio, to which Don Malfon on alto and baritone saxophones was added close to the recording date, increasing the spectrum of reed registers. The tracks are named ‘Fire Rose’ 1 to 10; “La Rosa de Foc” was the name given to Barcelona after the events of the Tragic Week of civil insurrection in the summer of 1909 – another modernist image of a terrible beauty and an epithet for the city that has stuck. As a bouquet the album is anything but decorative however, having the irruptive energy of Cy Twombly’s floral paintings with their phosphorescent blooms flourishing and withering at the same time.

In many ways it’s a now familiar approach to improvisation: music at a molecular level in a state of constant fragmentation and reconstitution. The session adopts a similarly mobile approach to formations, comprising duos, a trio, quartets and quintets. This is geography without maps, a domain in which nothing is fixed – not even instrumental sonority that shifts with each new terrain – moving forward in digressions, advancing by indirection. The music is nevertheless unified by the same animating spirit, a self-replenishing fusion of expressive intent with an understanding of the physical properties and capabilities of instruments, the way transient materials guide and respond, something that has to be learnt in order to be discovered afresh and which in turn folds back giving rise to new locutions, pluralities and pockets of feeling. The pieces have a sensuous immediacy that echoes the rough-and-tumble of lived time and all its quirky drifts and detours, memories prompted but not processed.

The presence of Guy’s fulsome, yet also strangely incorporeal bass ensures that some of the quintet performances reach a level beyond which lies the possibility of complete combustion or total collapse. ‘Fire Rose No. 1’ begins with a series of aftershocks from some primal event trailing off into ephemeral, ever-flowing currents of sound. Like water, the music resists dissection as configurations surge and subside. During ‘No. 2’, the seething broth is so hectic that the ear temporarily leaves the discombobulated mind behind until the waves recede revealing pools of jerky, spluttering activity. In the more placid ‘No. 5’, solids crumble and time is distended as the quintet’s instruments gently dilute and coalesce into gauzy textures.

The other groupings retain this sense of alchemical transformation. The first quartet is a sensory network lit up, navigated by zig-zagging piano; the second made up from charged yet soluble particles in vibrant display where notions of orientation and trajectory begin to lose purchase. The trio with Cirera and Guy features Fernández’ seamless integration of keyboard and piano internals that metamorphose into exotic percussion, spawning jangly, metallic washes and muted twangs.

Malfon appears in all three duos. On ‘No. 4’, baritone and bass explore creaks, squeaks and the Stygian lower registers in a way that makes them sound like a single entity with a dual aspect. With Cirera, the saxophones are mingled in granular multiphonics, and on the pairing with Fernández his scruffy alto, then baritone, are accompanied by deconstructed piano. ‘Fire Rose No. 10’ returns us to the swirling turbulence and scrambled perspectives of the opening quintets; perhaps also – as with Twombly’s roses – a reminder of the fleeting impulses and fragile pleasures that make up our lives.

Bouquet is available on CD and as a download from Bandcamp. 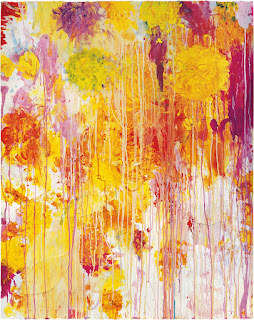 Thank you, Colin for this great review. Not only does it justice to the music but your choice of words and metaphors is a pleasure to read. In a sense nearly too good. Almost looming with the possibility to distract from the review's subject.

Thanks, Ernst. It is difficult, as any reviewer is trying to use metaphor, analogy and allusion by employing words and images to communicate something meaningful about what’s going on in the quite separate and distinct realm of music, and often highly abstract music at that.

Notions of liquidity and time-dwelling change seemed to provide certain parallels, prompted by Fernández’ observations, but there is of course no precise substitute for the sonic world that has its own, indigenous qualities, which is what makes it so fascinating – it touches areas of feeling and thought that can’t be reached in quite the same way by other means. Approximation by description is the best we can do though I like to think there are times when it can get us close, or at least spark sufficient interest to listen further. I certainly hope my writing isn’t a distraction.

What a fine piece of writing Colin, I'll be sure to check this out. Great review.

Hi Colin, your review certainly gives me a spark. I've the CD since some weeks. Otherwise I would have ordered it, swiftly, after reading your very appreciated approximation.

As others above have noted, some lovely writing here. I was sold the moment you mentioned Twombly. Lovely to see the painting at the end, gorgeous. What a master he was.