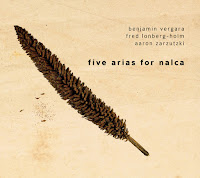 It makes me really happy that there seem to exist a million ways to explore the possibilities of sound. Inexhaustible Editions is one of those small labels trying to present parts of this adventurous sonic spectrum. The trio of Benjamin Vergara on trumpet, Fred Longberg-Holm on cell and Aaron Zarzutzki on synthesizer and various objects allow us to make assumptions about their unusual instrumentation.

Those assumptions are mostly based on the given that their willingness to explore leaves the listener within a constant flux of sounds. That is a good thing though…They approach their collective sound in the same abstract way the cover art presents us this cd. You, the listener, will find more questions than answers within the five tracks (arias I to V accordingly) that comprise the bulk of this CD.
I would make a guess that calling each track an aria, considering the historical burden of the word, is a way to de-normalize, to provide it with a new meaning. Another thought would be that they really want to be humorous. Could be, but that wouldn’t say anything about how serious they are in what they present us.

Vergara’s trumpet is an instrument of airy blurbs and constant small noisy gestures that never dominate but rather articulate an ego-less way of playing. Longberg-Holm’s cello starts, on the first two tracks, as a constant drone provider but in the process all noises are possible from its body and strings. The role of a synth or various objects in general in an improvisational recording always puts me in a position of trying to really listen hard so to understand what is going on. In Zarzutzki’s case his experimental approach on the synth and his, less is more, attitude by using small objects as percussion instruments, works fine. In fact he provides the glue that brings all the separate pieces together.

I really enjoyed all arias of the CD. There’s a constant flow of ideas, sometimes more than expected. If I had to pinpoint a flaw, it would be this saturation of ideas in some parts of the recording. But there’s another side to this as well. In all five tracks there’s never just a single idea of how the recording will proceed. They seem to decide on the spot, always ready to change direction or choose another path. This is probably the most important lesson learned in collective improvisation.