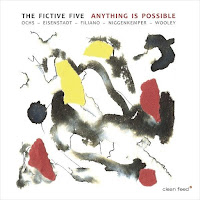 On Anything Is Possible, the second release from the Fictive Five, the band continues its efforts to make music with cinematic scope and feel—appropriately enough, given the filmmakers who are often the dedicatees of the pieces. Wim Wenders, William Kentridge and Kelly Reichardt were feted on the group’s self-titled debut, while on the follow-up it’s Spike Lee and Warren Sonbert getting a tip of the hat—along with Cecil Taylor, whose music often had a certain cinematic power of its own.

This isn’t music that relies heavily on pulse or melody, but rather sonority and texture—and a heck of a lot of imagination, as each of these players possesses a command over their instrument that allows them to take full advantage of the freedom built into Ochs’s compositions. Most significantly, the group uses a two-bass approach, with Pascal Niggenkemper and Ken Filiano generally eschewing the traditional “jazz” role of anchoring tempo or harmony. Instead they use the full range of their low-end sonics, complemented by generous use of various electronic effects, to provide atmosphere and mood. Drummer Harris Eisenstadt takes a similar strategy, using his kit not so much to propel the music forward but to contribute as a colorist and commentator, with subtlety and nuance the name of the game. And the dual-horn threat of Ochs, who plays both sopranino and tenor saxophone here, and Nate Wooley, whose trumpet (as always) runs the gamut of expressive possibilities, makes for a superb complementary team, consistently responsive and sympathetic both to each other and to their counterparts.

Three of the pieces are exceptionally expansive and lengthy, with two clocking in at over nineteen minutes, so there is abundant room for ideas to develop and evolve. And although three are formally credited as Ochs compositions, Ochs always remains sensitive to channeling rather than stifling the players’ creativity and spontaneity, thus avoiding the temptation to over-determine the pieces. There is thus a lot of space in this music, and patience is crucial to the listening experience, as much of its value is found in the various interactions between the musicians, often just two or three at a time.

“Immediate Human Response,” the album’s opener, is representative of the group’s aesthetic, as the players enter and recede throughout the piece, occasionally converging on a particular rhythmic or melodic motif, but more commonly occupying a much less determinate space. Moments of energy and fire do arise, but like most of the album, the prevailing ethos is one of a lengthy conversation that takes its time—and with plenty of room for thought and reflection along the way. “The Others Dream,” like “Immediate Human Response” credited to Ochs, is similar, with even more room for individual expression. Ochs in particular is in fine form here, with pointed, acerbic cries, and Wooley characteristically finds his unique space between abstraction and lyricism. But to focus on the individuals over the group as a whole would be a mistake, as Niggenkemper and Filiano generate some exceptionally compelling atmospherics, with Eisenstadt adding the well-timed interjections and steady commentary needed to keep the conversation moving. And when Wooley and Ochs join forces, their mutual interactions are quite stimulating, taking the music’s collective power to another level. “With Liberties and Latitude for All” may be the most ambitious and far-ranging of the five pieces, with smaller exchanges that build gradually to something bigger—and even the emergence of a pulse, culminating in a free-jazz segment that represents the album’s most convincing nod to jazz tradition, as Wooley and Ochs soar over a hard-swinging rhythmic foundation provided by the basses and Eisenstadt.

Interestingly, “And the Door Blows Open,” honoring Cecil Taylor, is both the briefest of the five tracks, at only four minutes, and also the least forbidding, with Wooley in particular sounding especially sensitive and tuneful. Along with the album’s closer, “A Fictive Form of Closure,” it’s collectively improvised; but it’s a credit to the rapport of these musicians that these tracks feel wholly of a piece with the rest of the album, making compositional origins more or less irrelevant.
Far from an episodic meeting of top-flight improvisers, the Fictive Five is a group with a well-honed, distinctive sound and identity, and Anything Is Possible contributes nicely to what will hopefully become a lengthy catalog.
Paul on Sunday, September 15, 2019
Share

Nice review, Troy. There is indeed a kind of cinematic continuity at work here: characters moving in and out of focus, scene switching, and private exchanges that open out into larger vistas, all with a sense of stories being told. The music has a satisfying dramatic logic.

Great writing, as usual, Troy. I had missed the fact there was a new Fictive Five release this year. I really liked the first. And this new one sounds really excellent.

The individual tracks are on YouTube. Here’s the first:

Thanks, guys. It is always good to see another aspect of Larry Ochs' creativity. This is indeed a fine group.