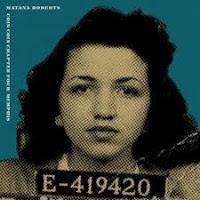 The waiting has come to an end - Matana Roberts is back with the fourth chapter of her outstanding Coin Coin series, which has rightfully been praised as the most interesting long-term project in modern jazz. For those not familiar with the idea of the project: the first three Coin Coin albums, Gens de Couleurs Libres, Mississippi Moonchile, and River Run Thee, released between 2011 and 2015, were supposed to present history from a different perspective. Coin Coin has been planned as a 12-part magnum opus based on the life story of the former slave and later entrepreneur Marie Thérèse Coincoin, who lived in Louisiana at the turn of the 18th to the 19th century and was an ancestor of Roberts, whose parents moved from the South to Chicago and also used Coincoin as a nickname for their daughter. The project is therefore also a personal quest for one's own roots, but in the sense of an alternative historiography it’s much more than that. As a result, this album - like its predecessors - is both field research, political intervention, and sound event at the same time.

On Memphis, Roberts displays a vision of the past, the memories of a young woman whose parents were killed by the KKK, a story handed down to her by her Memphis-born grandmother. Roberts structures this story on the basis of a sequence of weekdays, at first the atmosphere seems idyllic and peaceful - from the child's point of view everything is rather jaunty, symbolised in the repeated phrase “I am a child of the wind / even daddy said so / we used to race and I would always win and he said / run baby run / run like the wind / that's it, the wind / the memory is the most unusual thing / peace be still“. However, in “All Things Beautiful“ this phrase gets a deeper, dramatic meaning, because the playful context is suddenly gone, everything becomes deadly serious: the little girl has to run for her life, because the family is hunted down by a racist mob. The girl manages to escape in the woods but is never to see her parents again.

Apart from the multidisciplinary aesthetics and narrative power Roberts has used on the previous Coin Coin albums, she has also presented different compositional approaches - she calls this “Panorama Sound Quilting“ -, the music arrangements ranged from big band to sextet to solo. Her music has mostly been categorized as free jazz but in reality it’s more like a cacophonous soundtrack consisting of a loud bouquet of horns, ouds, jaw harps, mouth organs, violins, guitars and vibraphones. That’s why Memphis is reminiscent of Gens de Couleurs Libres, like on the first part of the series, Roberts uses blues, Latin American music, and gospel motives, she even quotes jazz classics (here “St. Louis Blues“ in “Fit to be Tied“). In the longest piece (the album consists of 13 tracks but is rather one long suite), “Trail of the Smiling Sphinx“, Roberts layers bluegrass fiddles, freely improvising wind instruments and dark rhythms on top of each other, a fascinating mess of styles that points out that the blacks and whites in the South were clearly separated (“the house of god, they say, was no place for the mixing of races“, the child remembers someone say at the end of the track).

Moreover, Roberts uses different vocal and verbal techniques: folk song, recitation, cathartic throat screaming, opera voice, soft lullaby, choir music, call-and-response schemes - in general the revival of various American folk traditions and spirituals. Still, in the center there’s always Roberts and her instrument - the alto saxophone. For Coin Coin Chapter Four: Memphis, Roberts founded a new band with Hannah Marcus (guitars, violin, accordion), percussionist Ryan Sawyer, the Montréal bassist Nicolas Caloia, and Sam Shalabi on guitar and oud (she has worked with him on her Feldspar album), as well as the extraordinary New-York-based trombonist Steve Swell and the vibraphonist Ryan White as special guests. Surrounded by these excellent musicians, Roberts’s alto is at its most sublime place, at the same time integrated into their sounds and dominating them. This arrangement makes her sound radiating even more beautiful.

In a nutshell: Coin Coin Chapter Four: Memphis is the next element of Roberts’s contribution to 21st century liberation music, oscillating between meditative evocative explorations, jazz tradition and free improvisations. Without any doubt my album of the year.

Coin Coin Chapter Four: Memphis is available on vinyl (180g LP), CD and as a download. You can buy it from the label.

You can listen to parts of the album here: