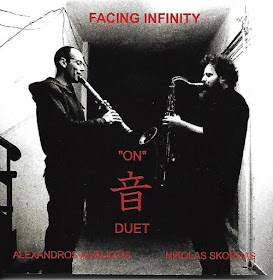 The Nikolas Skordas and Alexandros Aivaliotis duet develops his music on a path where west meets east. Skordas plays soprano sax but also traditional flutes, tarogato (a woodwind instrument rooted in Hungarian and Rumenian folk music, but also in free jazz – Peter Brotzmann and Evan Parker occasionally played it) and percussion. Aivaliotis plays the Shakuhachi (Japanese and Chinese longitudinal bamboo flute used among other things for the practice of suizen – or blowing meditation).

The name of the duet is a clear declaration of intents, in Greek ‘on’ is the sentient being, the same phonetics in Japanese means sound as the original form of frequency creation through air. The ideogram which stand for this sound, is composed by two other ideograms meaning ‘stand up’ and the ‘’sun’ viz the rising of the light.

And music is exactly what you can guess: an exploration of sounds, an interchange between the two players which produces evocative minimal soundscapes. The sax and the flutes interact creating a rich interplay which develops in the twelve pieces with a sense of continuity without being repetitive. The sound of the shakuhachi in the solo piece “The Joy of Loneliness” is clearly evocative of an eastern path but the blending with the sax an original sound which appears well represented in the track “on” where Skordas and Aivaliotis begin as solos to joins their music in the third part of the piece.

The last track “Farwell” introduces a new element, the chant of Sophia Koroxenou and the sound of the voice creates a natural interaction with the blow of the winds somehow closing the circle.