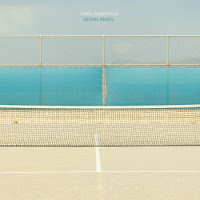 
A continuation of Oren Ambarchi's work on the Editions Mego record label, Simian Angel takes a pleasant detour from the more recent path the Australian musician has traveled. Even then it's no surprise that Ambarchi would collaborate with Cyro Baptista; the Brazilian percussionist who maintains a rich and vital role within the "Downtown" scene in New York. Both musicians have a definite knack for collaboration, with a long history of Mycorrhizal network style interaction with musicians from all types of artistic and cultural backgrounds. In other words, the influence and collaborations have proven to be mutually beneficial for whoever is involved. For Ambarchi, the music in its physical form is an important aspect to consider. As a fellow lover of the record format I appreciate the reissuing of groundbreaking works on his Black Truffle label as well as the attention to detail he puts into design of each album. In a way, this music has become singular and unique through its blending of various bits and pieces. In this case it's Brazilian chants and percussion arranged with dreamy ambient atmospheres created from Ambarchi's guitar playing.

Simian Angel almost follows in the footsteps of the musical idea of the Fourth World which was pioneered by Jon Hassell. But rather than just borrowing techniques and instruments from different cultures, Ambarchi's influences render themselves into a single gripping statement that develop over the course of time. He plays around with this vital element of time, with most songs being longer than ten minutes. Ambarchi's music has thrived in this format of musical exploration, and it's clear that he works with a drive and precision that is incomparable. The album is composed of just two side-long pieces, "Palm Sugar Candy" and the self-titled "Simian Angel". Both explore using similar instrumentation, yet these pieces create two very different atmospheres within their fifteen to twenty minute run time. Not only does this release delve into new terrain, but it recalls the organic beauty of a release such as Grapes from the Estate.

"Palm Sugar Candy" immediately portrays a mood of yearning, with a spacey ambiance that is seldom heard in the Ambarchi catalog. I'm dropped back down to Earth only a few minutes later as Baptista's whispered words and shaking instrumentation make their way to the forefront. There's a pivotal change around seven minutes and forty five seconds during which the drone drops and percussive pace increases. During this latter half, I feel completely submerged in warm, tropical waters. Although intimidating at first, the track concludes with a sustained tranquility that is hard to match. The instrumentation on this album is frequently hard to pin down, leading me to feel a childlike sense of wonder. The music stands as is, even the context for instruments used is hidden. Ambarchi is credited with playing "guitars & whatnot" and Baptista is simply "percussion & voice".

I am almost certain however that the beginning segment of the song "Simian Angel" is the Brazilian berimbau played by Baptista. This single-stringed percussive instrument provides a metallic twang that roots the twenty-minute excursion. The improvisational playing of such an instrument evokes the specific atmosphere associated with musicians like Naná Vasconcelos on the ECM label. While the berimbau disappears, a new trail has been uncovered which leads to earthy, meditative keyboard playing. Baptista takes a step back but returns with shaking percussion, maintaining a steady rhythm along with a sweeping drone line. This establishes an aural environment much like a river, with the keyboard blurbs assuming the role of small pebbles splashing in the stream of sound. Much like "Palm Sugar Candy", there's an underlying peacefulness that resides deep within the fibers of the music. This is quite the unorthodox summertime album, yet the tan tennis court and aqua background invoke shallow, sandy beaches in Brazil. Ideally, I'd be listening to this with headphones on and staring out into the open ocean. For already established fans of Oren Ambarchi, Simian Angel serves as a refreshing, undiscovered side of his music. For those unfamiliar with him or this style of music, I couldn't think of a better place to start.