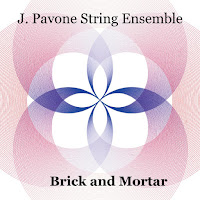 Jessica Pavone has been an integral part of the improvised music scene for the better part of this century. From her long running duo with Mary Halvorson (still can’t believe I missed them when they were in town 15 years ago, why didn’t I cancel my own gig to see their’s?), to appearances with legends like Anthony Braxton and William Parker, to her current role in the band Jobs and a recent string of excellent solo viola albums, Pavone has developed a unique voice both as a composer and violist.

The new album Brick and Mortar, credited to the J. Pavone String Ensemble, sees Pavone helming a string quartet of two violins and two violas. The music shimmers and twists around bends, recalling the rhythms of a subway train hurtling across the city, hinting at the quiet force of a shallow river slowly eroding the earth beneath it. The music builds on similar techniques that Pavone has been exploring on solo albums like Knuckle Under (2014) and In The Action (2019).

Much of the album is constructed from small thoughts expanded through repetition and subtle variation. The first track “Hurt and Hurdle” hits with the shifting rhythm of sunlight filtered by the trees on an Appalachian mountainside. The second cut “Lullaby and Goodnight” percolates up through the layers of your memory like a forgotten piece of your childhood. The illuminating drones of the title track dance like the charge of a 9v battery gingerly placed against your tongue slowed to glacial speeds. The album ends with the achingly beautiful “By and Large,” which mostly feels like you’re eavesdropping on an intimate ritual.

Special mention to Bob Bellerue for his excellent recording, done at ISSUE Project Room, and to Weasel Water for the mastering. The album sounds excellent, a wonderful thing given how the music is so deeply focused on the actual physicality of the sounds and the tones of these acoustic instruments and their performers. The recording sounds like you're eavesdropping on a most intimate ritual.