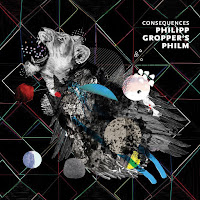 Philm is Philipp Gropper (saxophone/composition), Elias Stemeseder (piano/synthesizer), Robert Landfermann (bass) and Oliver Steidle (drums). The band has existed for seven years now and Consequences is their fifth album. A main characteristic of their music is that they transfer multi-layered themes into compact compositions, in which strong, individual statements pop up like geysers. On this album, Philm have made a real leap forward in quality compared to Sun Ship, their last studio release. The line up has changed, with Robert Landfermann replacing Andreas Lang (which could also be heard on the live recording Live at Bimhuis) and they have further developed their textural, colourful and tightly knit sound, which is sometimes reminiscent of the best moments of Tim Berne's Snakeoil.

Although the compositions show different musical points of reference from the long history of jazz, electronic music, hip-hop, new music, or the classical music of Africa and India can also be considered inspiration for Philm’s music. In general, natural phenomena such as the different undercurrents of waves, the tremendous power of hurricanes, and the drift of massive tectonic plates are translated into concrete musical images by means of various compositional techniques. However, as important as the rhythmic and harmonic cells that structure the compositions and improvisations, the same applies to the sounds. Sometimes they seem to be torn apart, which is especially true for Stemeseder’s synthesizer snippets. A perfect example of their approach is “Saturn“, in which an eerie electronic texture underlines a complex drum and bass rhythm, while the sax soars with minimal, even psychedelic lines that drag you in. At the 3:30 mark the composition takes a turn, changes to an uptempo modern jazz piece, just to take a balladesque break before it ends in a complex harmonic maze.


Often the compositions are structured around changing polyrhythms, but they result in delusive simple grooves, which on the one hand seem enraptured and haunting, but on the other hand they’re also enormously intense, e.g. when Gropper and Stemeseder chase up the scale in “Consequences 1“. Overall tight and methodical, the music never relaxes in long melodies or solos, it’s a rather tightening and loosening of sounds and changes that moves the music along. Unlike the jump-cuts of John Zorn or the modular repetitions of Nik Bärtsch’s groups, Philm is an ever shifting bricolage of tones and textures, forced together into unsettling but ultimately satisfying music.

You can listen to some tracks and buy the album here.

Watch the video for “Consequences“: