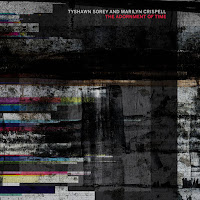 “There is only one place, and that place is time.”
(Russell Hoban.)

Tyshawn Sorey’s latest album is a masterwork of a journey – an oceanic experience that begins its voyage with quiet, focused intent.

Recorded live at The Kitchen (NYC) in October 2018 it is – incredibly – only the third duo performance between the drummer/percussionist and pianist Marilyn Crispell. The respect between the two artists is musically palpable and Sorey has spoken of the pianist’s “mindful decision making, intense listening, and the profound clarity with which she creatively responds.”

The darkened hall, lit only by two dim lamps, became the space of “a meeting of two spirits on a path of sound” (Crispell) – with nothing predetermined or discussed in advance.

The opening of the journey begins with a single ‘Tok!’ of wood. A slow build, examining the parameters of the sound-space; percussion constructing a base kindling with precision and purpose – knowing its role in the coming fire. Single notes of plucked piano innards move into a gentle, eking radiance of keys and chimes. At six minutes – the first distant rumbles of thunder, listening across the expansive surface plane, feeling a growing depth; a dark storm approaching.

Not only an exploration of sound and silences, but more unexpectedly – sound and space; dark, hanging-open, vertiginous space – like being suspended from a single rope, miles off shore, over deep black water, in darkest night; suspended and adorned.

Percussive chimes lead us back to the journey – to what sounds like timbers being struck, constructing sound; as a sailor might – superstitiously – touch his head to the wooden vessel, the music here embodies the relationship between the actual materiality of its own creation, through action in space. Crispell responds with pizzicato piano strings that project the playing of a harp in a field of ripped corn. Then scratched strings sound as Sorey’s bass drum tries to burrow in beneath the floor.

At the fifty minute mark huge tympani-like rolls boom before shifting into a chain-rattled invitation where the piano graces back in; a melancholy slow dance of slow-motion tears, of glockenspiel and falling chords – a chiming dialogue in decaying time.

Suddenly, a spontaneously composed coda appears. Crispell, emanating beauty outward before a tidal wall of drums seduces one into an expected end – but the piano breaks free and shifts into a slanting, sideways barrel roll only to become drawn back into a horizon point of conclusion through an overwhelming tightening snare.

Thrillingly dynamic, the breathless finale shows just how much expanse and dense narrative drive can be elicited from just drums and piano, when in the right hands.
A complete experience.

At no point in its unbroken sixty-five minutes does The Adornment of Time meander or fall into ruminative discursion, there is always a progression in movement of improvised intent and structural logic – displayed through the sheer depth of musical communication.