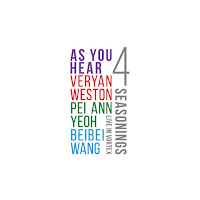 Pianist Veryan Weston has been a significant figure in improvised music for decades, distinguished as a soloist (on keyboards ranging from Brussels’ Luthéal piano to tracker-action organs), a composer (his brilliant Tessellations has assumed multiple forms from solo piano to choral work) and a partner in a series of long-running collaborations (most notably with Phil Minton, Trevor Watts and Jon Rose). As You Hear is a new formation with violinist Pei Ann Yeoh and percussionist Beibei Wang, younger members of London’s rich community of improvisers. The trio is heard here in an engaging 72-minute set from the Vortex that consists of four substantial improvisations named for spices: Masala, Galangal, Berbere and Five Spice.

As that might suggest, there’s a certain playfulness among the three, a chameleonic shifting of identities that includes rapid concordance and sudden divergence, each musician quick to pick up on and initiate new directions. As with several Weston partnerships, there’s an intense interest in details of pitch, with Yeoh a complementary master of quarter tones. She’s particularly adept at discarding the trappings of classical virtuosity, at times reducing her role to a thoughtful ostinato of pizzicato dissonances. Wang adds great rhythmic vitality and variety as well, rapidly creating engaging patterns and sometimes creating near-vocal effects with subtly inflected drumbeats. Weston’s contrapuntal flurries are always a joy to hear and the three together create dense webs of interactive particles.

Weston's subtle and profound apprehension of the discontinuities, contradictions and limitations of harmonic systems are near their peak here, in a trio with two fine musicians, at once receptive and forceful, whose cultural legacies and visions take in the tonal structures of both East and West. As heard here, they’re also thoroughly creative partners in the random jottings, impulses and joys of free improvisation.