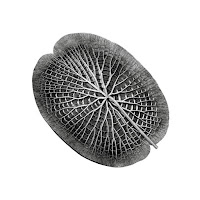 Chronic Shift is the fourth recording from the world’s first and only microtonal tuba ensemble and the second recording in which Peder Simonsen, who subbed in for Kristoffer Lo beginning with 2017’s Bite of the Orange, joins Robin Hayward and Martin Taxt. Simonsen extends his role here, remixing one track and adding adornments to the other. The base of both tracks, which last about half an hour together, is a live performance of two compositions recorded in Berlin’s Großer Wasserspeicher, an historic large brick water tower, during Bohemian Drips’ site-specific Speicher II festival in 2018.

Jazz recordings throughout the genre’s history frequently employ splicing, overdubbing, and like effects, but bonafide remixes - changing the character of a track, often through a narrow focus on the original material with supplementing additives - are more rare. Remixing’s roots are in dub and disco, traced through downtempo and techno, and, before I became an improvised music convert, I treasured the versions, edits, and remixes of Massive Attack, Tortoise, New Order, Basic Channel, and other similar admirers of the 12” single (I still do). Particularly when they came from the original musicians. They challenged my idea of the album version - and the album itself - as immutable monolith, which seems common in those coming from a rock background. In a way, the wide latitudes allowed by some compositions from improvising musicians allow for a kind of instant remix; every performance has the opportunity to refocus and illuminate new aspects of the composition. But it’s refreshing to see the studio tradition incorporated here. And like those tracks, Pederson narrows in on a detail of the composition and supplements it with synths, accentuating the spirit of the performance.

“Chronic Shift” is a remix of the Hayward composition “Sonic Drift,” which was performed for the first time at the Speicher II festival and cycles through harmonies based on the 11th, 13th, and 29th harmonics (for reference, “Bite of the Orange” is based on the 11th and 13th). Simonsen loops a sustained dyad from two tubas, signaled by a clear stop like a tape click, and adds water drops and faint electric pops, cracks, and beeps for an environment that would feel at home in a glitchy Jan Jelinek record. Occasionally the dyad loop is broken with the full chord. And eventually a sonar ping accompanies selected loops to create a cathartic effect similar to Sigur Rós’ “Svefn-g-englar.” Half way through the track, a rattling from Taxt’s tuba signals a shift from a fast clip to a creeping inertia and from an electric emphasis to an acoustic awareness. Columns of air filling the horn to the brim and beyond the brim, the corporeal pulse of each pitch’s undulating frequencies creating a wake behind the blast, and the impact and refraction and decay against the brick walls are all made audible. The high-quality audio, reduced speed, and reverberating locality lend a dimensionality or spatiality to the sound, like you’re there, swimming in the sound. But the perspective seems to have transferred from Gulliver’s to the Lilliputians’. It’s a dilapidated fanfare trapped in jelly, recalling William Basinski’s Disintegration Loops. Or a deep yawp from the bottom of a marine trench. Between the torpor, sonar ping, and water drops, Simonsen reflects the nature of the water tower site perfectly while simultaneously illuminating Hayward’s microtonal, corporeal harmonic concepts with loops and loop speed. As well as checking all of these conceptual, cognitive boxes, the music is engaging and emotive to the core. It’s my favorite track I’ve heard this year so far.

Quite a few of these broad concepts feel vital to the music now. A kind of droning, sine wave music, exploring harmony, dimensionality, and/or microtonality, appears to be gaining a growing audience, enough for blog readers to nominate Biliana Voutchkova & Michael Thieke’s Blurred Music as record of the year in 2018. There appears to be a growing emphasis on site-specific recordings, with prominent examples in Ken Vandermark’s Site Specific, the recent reissue of John Butcher’s Resonant Spaces, and the positive reception to field-recording-based music like last year’s Green Ways from Áine O’Dwyer & Graham Lambkin or this year’s Nature Denatured and Found Again from Michael Pisaro; likely reflecting a response to decreasing diversity in ecosystems and environments from urbanization and increasing homogeneity in history and experience from globalization. These site-specific recordings return the focus to the local, sometimes the natural. And finally the use of software. From George Lewis’ Voyager (e.g. this year’s Voyage and Homecoming with Roscoe Mitchell) to Anthony Braxton’s SuperCollider in his Diamond Curtain Wall Music to Hayward’s own Tuning Vine here, using intelligent software to compose and improvise appears to be on the rise. Interestingly, dionysianly, there’s a desire to advance with technology while retaining the organic past. To advance a new music through “non-music.” All of this is to say, there’s an impressive synthesis of ideas present here.

“System Reboot” is based on a composition created by the Tuning Vine. This is classic Microtub, with resonating, reverberating waves of tuba washing over you. A meditative, mysterious experience similar to Tibetan singing bowls. But sounded deeply and bodily. Simonsen adds a synth similar to the sonar ping, but in different tones, so it adds a more digestible sense of movement to what otherwise might seem too static. Having presented a performance in both fast and slow time, the ensemble asks the listener to recognize those previously highlighted components in real time here.

For its synthesis of concepts in space and dimension, site specificity and locality, microtonality, harmonics, and post-production and interactive software, while simultaneously emotive and addictively listenable, Chronic Shift is a prodigious capstone to a decade of marvelous work from this mighty ensemble. A digest compendium of its boundary-pushing journey thus far. A must-listen.

Chronic Shift is available digitally and on LP.