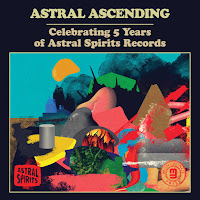 When I saw that independent label Astral Spirits was celebrating its fifth anniversary, I felt certain we should run a small feature. For one thing, it’s remarkable that a label publishing releases at their volume (minimum 16 per year, in quarterly batches of four cassette/digital releases, plus limited-run digital, vinyl, CD, and cassette releases) has sustained a breathless pace of remarkable quality. We have tried (and mostly succeeded!) to cover as much of the label’s output as possible over the years, and several have turned up on our various year-end lists. To celebrate and reflect on the 110+ albums released on Astral Spirits and Astral Editions , we wanted to take a few days to talk about the label, its impact on the Austin scene specifically, and some of the recent and upcoming releases to take note of.

To capture the history to date of Astral Spirits, founder Nate Cross assembled a massive three-hour compilation, Astral Ascending, available as a digital download only (so far, but I wouldn’t be surprised if some of these exclusives made their way to limited pressings of some kind—as far as I can tell, the only format Nate hasn’t used yet is the cassingle, which would be perfect for one or two of these). What makes Astral Ascending a notable release is how deftly it captures the intangible qualities of the Astral Sprits sonic aesthetic. In a sense, the evolution of the label’s visual design has paralleled its growth from a self-proclaimed home for the new wave of heavy free jazz to something a bit more amorphous and exciting while no less new, heavy, or free. Skirting a traditional chronological format, the compilation combines previously released, soon-to-be released, and unreleased material with an ebb and flow that juxtaposes tracks like Claire Rousay’s “Lovers” with an unreleased duo recording of John Butcher and Ståle Liavik Solberg (who released a trio album with Pat Thomas earlier this year on Astral Spirits).

As a sampler of the people and sounds that make up the greater Astral Spirits community, many are highlighted, like Butcher and Solberg, in new and previously unrecorded configurations. For example, the compilation starts with drummer Quin Kirchner expanding his sextet to a nonet, on a live recording of “Together We Can Explore the Furthest Beyond” (the original appeared on his debut album). Similarly, Lisa Cameron and Sandy Ewen are featured in an excerpt from a recent live performance that highlights their impressive range. Astral Spirits regular Charles Rumback appears with a new quartet featuring Macie Stewart, Nick Macri, and the great Ron Miles. Several tracks later, Jaap Blonk, Jeb Biship, Damon Smith, and Weasel Walter blow the walls off Willimantic Records with a four-minute excerpt of a live show. And Fred Lonberg-Holm, Anton Hatwich, and Avreeayl Ra appear in an as-yet unreleased trio performance.

Several groups with albums coming out in late 2019 get a preview appearance, including Kobra Quartet, members of Komeshi Trio, and the duo of Nathan Alexander Pape & Patrick Breiner, whose debut Ground Air is out on Astral Spirits sub-label Astral Editions. The label serves as a preview, of sorts, for some of the more experimental groups. Violinist Macie Stewart reappears with cellist Lia Kohl, who released Pocket Full of Bees earlier this year on Astral Editions. A track from that album, “Toothpick Bicycle,” appears here with the promise of a full-length Astral Spirits release in 2020. Among the other 2020 releases teased in the liner notes, is one that’s sure to capture readers’ attention, a double album from Karl Evangelista, Alexander Hawkins, Louis Moholo-Moholo & Trevor Watts. The sample here, “FDT,” hints at the greatness to come on this album, which continues to build on the powerful partnership of Hawkins and Moholo-Moholo.

With over 30 tracks, and running several hours, there’s plenty to explore on Astral Ascending, for both newbies, casual fans, and the hardcore supporters. And here’s to the future of radical sounds, psychedelic artwork, and ecstatic experimentalism.