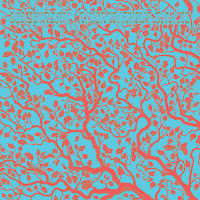 Leo Svirsky's River Without Banks is a beautiful addition to the world of minimalist piano driven music. It in a wonderful way eludes category however. It bears resemblance surely to music associated with contemporary classical, yet there are the intentions and aesthetic choices of an improviser, and "experimental music" more broadly. As well, the collaborative elements of the record also moves it away from registering as a solo recital

The music on River Without Banks isn't quite "solo" anyway. The bulk of the sound is arrangement for two pianos, played in such a way that it both sounds like one piano, as well as two pianos perfectly just out of phase with each other. I suspect there's some delay on them as well, but the core sound is organic and clear.

Chords and melodies ping back and forth, creating this engulfing effect that is present throughout the entire record, Svirsky's melodies are simple, but when presented through the atmosphere that he creates they can feel devastating. A small melodic turn can feel like an enlightenment. Svirsky's music leans heavily on this mood, though touch and discrete movement are also significant. See "Strange Lands and People" -- the longest track on here and what feels like the emotional climax. This is perhaps the most delicate playing on the album, with the most stated dynamic range, and it works perfectly. This is dramatic music! It's twists and resolves, and sits in tension again. But it's always appropriately restrained, resourceful.

Elsewhere, there are lovely contributions from a few collaborators. Leila Bordreuil (cello) and Britton Powell (upright bass) add sublime long tones to the title track, a nice touch towards the end of the piece (which more or less feeds in straight from the first track) and in the back of the mix. The strings build the composition into a greater lushness, and almost sound like they could be coming from the ringing piano overtones. Every musical choice feels spot on. Powell's bass is put to good use on "Rain, Rivers, Forest, Corn, Wind, Sand" as well, his bow stuttering along with the less languid, more pulsating piano figures on this piece. Here I'm reminded a bit of the Necks, and specifically Chris Abrahams unique playing. Melodic, repeating, assertive, present.

In general Svirsky's music brings to mind the Necks, as well as other instrumental music that privileges patience and slow moving musical activity. In this respect, I hear as well the sounds of Lubomyr Melnyk, the great Ukrainian composer of "continuous music," a technique utilizing continually played notes on the piano, using the sustain pedal, to create an effect awash in overtones and harmonies. Svirsky is surely up to something slightly different than this, something more compositionally compact, but this conceit does get at the heart of the pleasure of listening to this record. You can sink into the sound, pop up for air to notice one thing or another, only to return again.