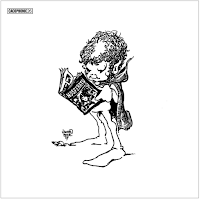 Probably less known to international audiences, but French pianist François Tusques was one of the pioneers of free jazz, already in the early 60s. Originally self-taught, he continued more formal courses at the conservatory of music once he got hooked up to jazz during his teens. He met some of the American jazz musicians then living in France and Europe, such as Don Cherry (with whom he performed and recently released a short duet), Clifford Thornton, Sunny Murray, Arthur Jones. His first album in 1965 was called "Free Jazz". Later he expanded his sound with more international influences, which he called "Nouveau Jazz" (new jazz), with the expectation to reach broader audiences without compromising on quality and adventure.

In the last few years, several of his albums have been re-issued, and this one really is worth some attention. Like many other initiatives by Tusques, this one is also inspired by literature, and especially fantastic fiction, such as Alice in Wonderland or as in this case, the story of the vampire Nosferatu. and is the recording of a musical "happening". The intention was to expand listening experiences, including the use theatrical aspects during performances. Free jazz was still at the core, but themes and structures could be agreed upon beforehand.

The music on this album is absolutely adorable, if I may use that word: it has a kind of innocent enthusiasm for the expansion of horizons, while still offering a close-knit bunch of sounds that branch in all directions. It has this positive vibe, full of intense energy, that anything may happen and can happen. Despite the reference to a vampire in the title, there is nothing dark or foreboding in the music, quite to the contrary: it is warm, welcoming, open and still fresh, despite the fact that the tapes were unearthed in Tusques' basement. In the liner notes, he acknowledges that he has no idea when this performance happened, or even which musicians performed on it : "To the best of my recollections, and from posters and advertising of the events, the artists who took part in the 1969-1971 concerts who make up this record are Ronnie Beer, Joseph Déjean, Claude Delcloo, Earl Freeman, Beckie Friend, Eddy Gaumont, Beb Guérin, Noel McGhie, Jouck Minor, Barre Phillips, Aldo Romano, Alan Silva, Kenneth Terroade, Jacques Thollot and Bernard Vitet. Who, when, where (American Center quite often), exactly, I can't say".

It might be that Ronnie Beer is the lead saxophonist, and he's ferocious on the second of the three pieces, called "... La Voute d'Un Caveau", by itself already worth the purchase. Tusques himself is often content to lead the band without taking the lead voice, although he develops the great theme on the long first track "Le Fumet Du JubJub" and he takes the intro on the third piece, with a fresh clattering of dissonant chords and expansions, full of percussive intensity à la Cecil Taylor.

Tusques was at that time interested in the fantastic and in the movies of Jean Rollin, as was already mentioned with the revew of "La Reine des Vampires". The label is currently restoring some more of his music. We can't wait to hear it.