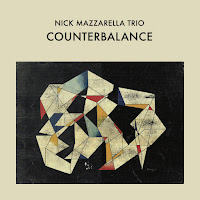 There is a masterful quality to this music. It's in the nonchalance of the playing & in the musicians' relationship to create with each other, sure. But it's not just high caliber improvisational music. The trio's ability to hear each other so completely is so.. well.. mature. There is an unhurried quality here. There is nothing forced; but neither does any stone lie untouched. The music within Counterbalance is about being fully developed in one's practice – and then carrying that into a space where change and adaptation is a prerequisite for creative collaboration. The end result exudes a richness that only a maturing process can produce.

The recording happened in front of a live audience in Chicago early last year. There are six tracks, divided evenly onto the LP's two sides, that all begin and end with simple head arrangements which the band members use to explore the elasticity of those heads in between. Four of the heads remind me immediately of Ornette's early work, particularly the Golden Circle era, given the trio setup here – but two of them have the jumpy melody lines more associated with Thelonious Monk, particularly on the last cut, “Innermost.” It doesn't conjure up any particular Monk composition, of course – just an overall unmistakable feel. What the group make of the head is altogether unsuitable for Monk: it becomes a brooding collaborative composition made up of long whole notes from bassist Anton Hatwich, smoking spiraling runs by Mazzarella on alto, and distant ghosts rattling chains by percussionist Frank Rosaly.

Mazzarella has a natural ability to expertly map a course for the music out of thin air which serves the group incredibly well. Rosaly and Hatwich are always enthusiastically on board. They not only provide the type of active support most band leaders dream of; they also excel at staying within the psychic realm of the music while escalating the overall structure with precision and melody. Yes, even the drummer – especially the drummer. Rosaly's soloing couldn't be more melodic if he was playing vibes. The axis he creates with Hatwich is often a steady rumble, but they may be at their most impressive on “About Looking,” where they lurk in the shadows, idling patiently, waiting to strike. The strike never comes, by the way – carrying the sense of unease into the title track which follows.

The title track was what I was listening to as I wrote the first paragraph of this review. I want to be clear. This music is not ecstatic, unhinged blowing. There is not a full-on rager in sight. It does not scream (too much) and it absolutely does not showboat. It does serve as an elegant bullshit repellent with which to class up any room it envelopes. It will serve as a smudge to clear away bad mojo. These creations are solidly within the tradition of free improvisational music, which means they also constantly push against the definition of that term. The statement that I'm hearing is an addendum. We are adults and this is our music.