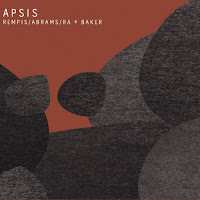 Dave Rempis has come to the fore in recent years as a powerful improvising saxophonist of the first rank, distinguished on baritone, tenor and alto alike, in part from the quality of documentation that’s been appearing on his Aerophonic label. Working in both Chicago and the world in different ensembles, Rempis is following up on bands as well as initially documenting them, demonstrating the growth clearly possible in degrees of group interaction. This is the third Aerophonic recording from this group as it has transitioned from trio to quartet. Aphelion, from 2014, introduced the trio of Rempis, bassist Joshua Abrams and drummer Avreeayl Ra. Their next recording, Perihelion from 2016, was a two-disc set, one by the trio, one by the trio with keyboardist Jim Baker as a guest. Baker is now a regular member, and Apsis testifies to both the strengths of a regular working band and to the special energies of Chicago free jazz.

Rempis always stands out for the sheer intensity and sustained commitment of his work. Here he opens on baritone on “Exedra,” the first of two extended tracks, with a massive wailing sound, then later switches to alto to reveal a fleet, even Jimmy Lyons-like lyricism. It’s straight-up free jazz, with Abrams an elemental presence and Ra generating tremendous heat. Baker is a mercurial element, whether prodding the dialogue or contributing exploratory solo forays that stretch toward new territory.

If “Exedra” is the roots version of Chicago free jazz, then “Mithrab” goes to the weirdness of its origins, invoking Sun Ra in all his strangeness. Rempis’s tenor connects to soul, bop and free elements in the city’s legacy (its tenor brigade alone has included Gene Ammons, Johnny Griffin, John Gilmore, Clifford Jordan, Hal Russell, Fred Anderson, Kalaparusha Maurice McIntyre and that key adopted son Ken Vandermark with whom Rempis has worked extensively), amidst Abrams’ scratchy bowed harmonics and Baker’s synthesizer invocation of Sun Ra magical keyboards, from an imitation of Rempis’s tenor at the outset to stretches of quavering near-theremin atmospherics.

There aren’t enough places where a band like this can work together often enough to get to this level of responsiveness, and the results are bracing, testimony to their environment as well as their commitment to the music.

Rempis has always been a wonderfully fluid sax player going back as far as the Vandermark 5. It's his ability to incorporate that into multiple working bands creating distinct group personae that sets him apart. Also his Aerophonic label has an extremely high standard in terms of quality of releases; I haven't purchased anything from it that hasn't been top notch. The same goes for Vandermark's Audiographic and Tim Daisy's Relay. It's almost sensory overload trying to keep up with them but it's a "problem" I'd rather have than not.

Agreed about Rempis, his groups are remarkably varied and uniformly incredible. I loved Perihelion, and this new release maintains the highs from that set. Baker's been such a welcome addition to this trio, and Abrams and Ra are on some whole other level.