The Madness of Tom Ward 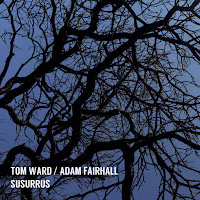 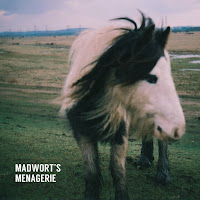 Tom Ward has been a regular presence on the British free jazz scene for several years now, performing in and fronting a number of avant-garde and free improvising groups, including the remarkably named Quadraceratops and Saxoctopus (yes, eight sax players), Madwort Saxophone Quartet (another all-sax, all-the-time group), Cath Roberts’s Favourite Animals, and the fantastic improvising trio Ma/Ti/Om with percussionist Matilda Rolfsson and bassist Tim Fairhall (if you get a chance, do check out Ma/Ti/Om’s Ashes and Live In London, both on Raw Tonk). Recently, though, Ward launched an independent record label, Madwort, which has fast become fertile ground for his expansive imagination.

Susurrus, the label’s first release, features Ward, on saxophone, bass clarinet, and tambin, in a duo with Adam Fairhall, on piano, accordion, harmonium, and prepared dulcitone. As evidenced by the instrumentation, Ward and Fairhall approach their duet as a musical sandbox of sorts, pushing outwardly against any expectations. Opening with a pointillist piano-sax duet, “Personable Pedantry,” delineate a constellation of notes across both instruments. It’s a nice tune that barely hints that what new- and space-age moments are to come. When Ward picks up bass clarinet and Fairhall moves to prepared dulcitone for “Susurrus,” the dynamism of their ideas creates a subtle trance state. The cover image of a tree without leaves intimates the kinds of effect Ward and Fairhall seem to be aiming for. The title, meaning whispering or murmuring, describes as clearly as it evokes, as the duo overall performs with a kind of conversational give-and-take, the players responding to each other with echoes and teases alike. “Spumous” features Fairhall’s harmonium paired with Ward’s tambin, a pairing that recurs on album-closer “Liminality.” Both performances bring hints of Don Cherry, a somewhat unexpected reference point for a saxophonist, but Ward seems as keenly connected to the spirit as Cherry, and his partnership with Fairhall is bountiful.

For all the meditative sincerity above, Madwort’ s Menagerie is a romp. A brand-new sextet—with the deceptively chamber-esque lineup of Ward on bass clarinet, Cath Roberts on baritone sax, Alex Bonney on cornet, Julie Kjær on flute, Adam Spiers on cello, and Tim Fairhall on double bass—the album blossoms with humor and bite. Ward’s music for the group boasts a thrilling depth, with pairings sliding in and out of focus on “Fish Biscuit Standoff.” It’s a summation of the album as a whole, ridiculous titles (see: “Unfortunate Interaction With a Chair”) and all. I’ve probably heard Kjær on flute more than I’ve heard her on sax now, and her opening on “Islands In the Green,” is grand and melancholy, a songlike melody that’s carried forward by half the band, while the others play a pulsing counter melody. Kjær plays a fantastic solo that leads into a superb solo by Fairhall. It’s not often a group this big performs without percussion of some kind, but the players embrace the openness of the lineup’s sound, with the inherent airiness buoyed by syncopated rhythms, counter melodies, and daring improvisation.

I’ve written several times about what an exciting time it is to be a listener, with platforms like Bandcamp boosting the signal of some of the brightest, most exciting players on various scenes. The British scene, in particular, seems to be embracing the possibilities. Madwort stands next to Lume, Efpi, Raw Tonk, and the many musicians self-releasing their work without a label. The hope (and promise) here is not only will Ward have a regular home for his output, but he’ll also continue to bring together new and exciting projects .

Both available via Bandcamp.