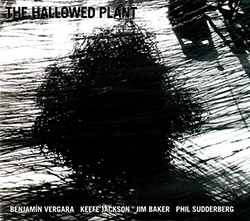 Three Chicago veterans meet Chilean trumpeter on this first – and so far, only – project from The Hallowed Plant. Recorded at the tail end of 2016, but not released until last year, this disc contains recordings of full-on group improvisations that are abstract and busy, full of texture – but not high on energy. It's not that kind of music. There is almost a disarming serenity to the music, often placing the listener into the eye of the storm.

Trumpeter Benjamin Vergara often leaps out as a composer, and I believe his central role is often inspirational to the other band members. There doesn't seem to be a leader on this session, but Vergara comes the closest. Reed man Keefe Jackson and pianist Jim Baker share a musical kinship that is certainly at work here, as they form an alliance that is mutually beneficial to both themselves and Vergara especially. Drummer Phil Sudderberg is great at wrangling the group and propelling them forward whenever they require a push. The working parts are all here and firing.

There's a great section from “This Moves To That” where Baker's chords underneath Vergara's one-note chant becomes a focal point, prodding Vergara – and eventually Sudderberg & Jackson – into inventive reactions. Then Vergara breaks out of his trance and leads the group to the finish line. “North Cult” is a place where horns imitate tube amps buzzing and feeding back for 15 minutes before turning into the most conventionally “jazz” sounding music on the album. My favorite ride in the plant though is “La Repentina Ola,” which opens with Jackson and Vergara chirping at each other while Baker shoots at them with a ray gun. Enter aggravated assault from Sudderberg and it's insane shrieking from Vergara, trilling/fluttering from Jackson, and full-on skin cancer from Baker. The most dangerous synthesizer console in free jazz!
Paul on Saturday, November 09, 2019
Share