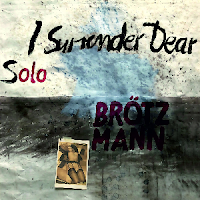 This recording arose out of a conversation with Peter Brötzmann over coffee in Budapest: solo performances of some of his favourite jazz tunes, along with his own. From the seven hours of music recorded over three days at Martin Siewert’s Vienna studio in 2018 Brötzmann made the current selection, played on tenor only, a tightening of focus and a beam that cuts because it is narrow. The album does not have the epic dimensions of the magisterial Münster Bern (Cubus, 2015), his previous solo recording made in the reverberant acoustic of Bern’s Gothic cathedral, but is a collection of very private performances more intimate in scale. Gone are the vaulting spans and in their place we have a succession of meditative studies, ruminations on tunes that have touched Brötzmann over the years perhaps as stations in his life replete with memories. Yet more than mere exercises in reminiscence they form past imperfect dialogues with the continuous present. “When I walk through the woods or stroll through a city I’m always whistling, tunes I have in my head through all my life,” he says in the brief liner notes, “and the only idea for this recording was to show – mostly to myself – the connection between what has been and what there is right NOW – the one can’t exist without the other.”

It’s tempting to speculate whether specific versions of some of these tunes lay behind the performances – for example: is it Billie Holiday on ‘Lady Sings the Blues’? – but that would be misplaced. Whatever recordings originally attracted him, with the passage of time Brötzmann has internalised these melodies and he sounds like nothing other than Brötzmann. They seem to exist in an indeterminate, largely tempoless realm, repeating and absorbed by themselves as though mulled over in his mind, telling him one thing and responded to with other voices, by turns caressing, elated, desperate; at times no reply at all. There are underlying connections, some tunes lead directly into others like wandering thoughts – ‘I Surrender Dear’ becomes ‘Lover Come Back to Me’, a theme from Bach emerges as a coda to ‘Dark Blues’ – others chart Brötzmann’s musical journey, or at least one particular narrative, not as a story but as events having a sequential nexus whose significance is known only to him. There’s no thematic development as such, instead an accumulation of self-communing reflections, and only rarely those blazing swarms of notes – everything is reduced to the bare bones, breaths are shorter, pauses longer and expression terse, conveyed by often barely perceptible shifts in intensity and intonation.

The opening ‘I Surrender Dear’ has a rasping edge getting grittier as the piece progresses. Softer phrases come through, are then scrambled and the remainder crosscuts between sweetness and dissolution. ‘Lover Come Back to Me’ is rendered in a ripe tone, barely contained that blisters and splits. Some pieces float almost entirely free of their original rhythmic structure and dwell on particular melodic figures, drawing out an interior aspect of the tune, a telling interval or phrase. The lilt and swagger of ‘Lady Sings the Blues’ drifts into a mesmeric space as if Brötzmann is transfixed by features of the melody and its rocking motion. Dizzy Gillespie’s ‘Con Alma’ is detached from its surrounding Latin rhythms, the contours of the melody etiolated and after a while sinking wearily into silence. Gershwin’s ‘Nice Work If You Can Get It’ is relieved of its normal jauntiness, its cadences readjusted as the tune becomes progressively estranged. Other numbers contain flashes of the more familiar, gutsy Brötzmann. He’s incorporated ‘Sumphin' by Sonny Rollins into his improvisations before and here, introduced by grizzled blasts, it rings out assertively but abruptly takes a doleful turn, ending incomplete. Similarly, on ‘Brozziman’, written by Misha Mengelberg, the resounding tune in the splintered high registers, full of blood and muscle, is sustained only briefly before fracturing as the phrases compress then come apart.

‘Improvisation über ein Thema von Bach’ uses the haunting Thema Regium that forms the basis of Bach’s Das Musikalisches Opfer (The Musical Offering), a melody reputedly written by Frederick the Great for Bach to improvise on while visiting the Prussian court. For Bach, the theme was a source for proliferation, woven through the canons and fugues like a golden thread; for Brötzmann it’s a continuation of other thoughts passing from one state to another, an improvisation around rather than on the theme, its rise and melancholic fall transformed into a tentative blues melody fleetingly registered. His own ‘Churchsong’ which follows is nothing grand, a tune of sparse simplicity played in an unhurried procession of even measures amplifying its ordinariness and thereby elevating its affect.

‘Love Poem Nr. 7’ was recorded on Brötzmann’s first solo album, 14 Love Poems (FMP, 1984) later released as a 20th anniversary expanded edition, 14 Love Poems Plus 10 More (FMP, 2004). There played on baritone sax and in embryonic form, it’s a talismanic tune that has run throughout his music – over time developing into the elegiac melody commonly known as ‘Master of a Small House’ after its appearance on Tales Out of Time (hatOLOGY, 2004) and also as a more bluesy variant, both frequently drawn on during performance. The latter is used on ‘Dark Blues’, a lingering interpretation in which the notes, having an almost physical sensation, fall singly and slowly as the melody withdraws into itself with ever decreasing energy. The emotionally draining penultimate track, ‘Ballade / Love Poem Nr. 7 / Blues’, interlaces all three versions. It begins with the Master theme, delivered with a thick vibrato, gently unwinds into Love Poem where the tune rouses itself in stark profile and eventually mutates into Blues, a mixture of resignation and flickering resistance. The album ends as it began with another performance of ‘I Surrender Dear’, not as a conclusion but a cycling back, returning to previously trodden ground furrowed by re-enactment. This time there’s the entranced atmosphere of a slow unending dream, broken harmonies and a brittle surface that introduce an apprehension of something dreaded, or desired, finally subdued in a quieter tone.

Brötzmann’s music has gravitated to emotional states in extremis reflecting the struggle at the heart of things, shifting between fervent passion and deep anguish – sensibilities on occasions indistinguishable – setting bright against dark, each requiring the other. On this album the light often dims to an intermediate, tenebrous grey, a twilight of shades and an endless horizon. Caught between resurrection of the past and refusal of consolation by the present there seems no place where the longed-for and the actual might coincide. At times I Surrender Dear is not comfortable listening, nor I suspect is it intended to be. Notwithstanding glimpses of beauty and moments of warmth there’s a pervading sense of disenchantment, with self and the world. Brötzmann is a musician for whom sentiments matter yet he refuses to indulge in sentimentality. As he states bluntly:


“There are two ways to master this life – trying to be clever and fulfil expectations or to take a (sometimes very masochistic) stroll through time and eternity, trying to find out what’s wrong with you. And if you have the feeling the bait is coming closer somebody moves the hook more far away again. That’s what I am busy with and…fuck the rest of the world.”

Except that these highly personal communions, embracing vulnerability and solitude, do amount to more than that and have an authority beyond the local. Like all great jazzmen Brötzmann mines the inarticulate to give voice to what cannot be said, making palpable what is sensed, for all of us.

The album is available digitally, on CD or as a download, and on vinyl.

Thank you Colin for this great or better: touching review. Very close to the subject without losing the necessary distance.
Wish you and all members of the Free Jazz Collective some peaceful holidays and a great new year 2020.

A beautifully written review of an album I'm oddly disconcerted to approach. The review goes some way to articulating for me just why. Thank you.
And, to echo the sentiments above, Merry Xmas all

Excellent review of The Last Man Standing, an inspiration to us all. Merry Christmas to the Free Jazz community.

Thanks. In many ways a difficult album to come to terms with but one that grows in stature each time I hear it.

Seasons greetings to you all.

An excellent review of, as all have acknowledged, a challenging and excellent album. Brötzmann was one of my free jazz gateway drugs, so I have a hard time getting critical distance from any of his albums. I appreciate all the effort you put into this one, and I’ll be revisiting it often while I continue listening. Wishing you all a joyous and noisy holiday.