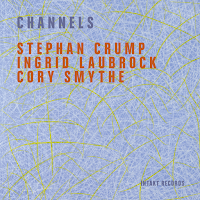 Some people just make it look easy. For us common folk, we can only scratch our heads at how some people excel like it’s a walk in the park. That is how I feel listening to these three as they spin yarns on their second release, Channels. Granted, these three are some of the hardest-working musicians in New York, so they’ve earned the right to baffle the rest of us.

The last few years have been good for these three. Stephan Crump (acoustic bass) released an excellent record with his Rosetta Trio this year. Ingrid Laubrock (saxophones) wowed the Free Jazz community with her LP, Contemporary Chaos Practices (Intakt, 2018), which was voted third in the 2018 Happy New Ears Poll (in a four-way tie with a very stacked roster of contenders). Pianist Cory Smythe found similar success after releasing his ambitious debut, Circulate Susanna (Pyroclastic, 2018), which was awarded a 5-star rating here at FJB. As if by divine fate, these three formed the triumvirate in 2015, releasing their debut studio record, Planktonic Finales (Intakt, 2017) to much acclaim. Beyond these achievements, I won’t even bother going into their respective resumes.

Channels is exactly the type of sophomore record that we should have hoped for from this trio.
Planktonic Finales consisted of eleven, short-ish tracks (only three that exceed six-minutes), whereas Channels is comprised of four longer improvisations, ranging from 10 to 16 minutes apiece (recorded live at the Unerhört! Festival in Zurich on December 1, 2017). I may be biased, but I especially enjoy improvised music in open, long-form - where the artists are afforded the opportunity to stretch out and explore the nooks and crannies of their craft.

The four-part trialogue on Channels creates a sort of aural odyssey, where individual pieces consist of their own arcs and emotional narratives, yet the whole feels almost like a composed chamber suite. In fact, one of the more striking qualities of Channels is how it feels like it should be composed. Had I seen this performance in person, I wouldn’t have batted an eye if I saw notated music in front of the performers. Instead, the trio spontaneously navigates uncharted waters so cohesively and gracefully. There are several joyous moments through Channels where the trio unanimously hits an unseen mark, all at the same moment. Take, for example, mid-way through the first track, “Fluvium.” Smythe gradually builds tension in a series of repeated, ascending lines; meanwhile, Crump contributes to the intensifying upheaval, alternating between rapid/altissimo and short/bass bowed notes. The upward spiral suddenly ends. In a soft and seamless transition, Crump bows a steady pulse, Smythe taps out crystalline figures and Laubrock enters on tenor playing a bluesy melody. They sound like a jazz trio here, hitting chords written down on a nonexistent piece of sheet music.

Movements like these are mercurial but common. There’s a singular sense of forward-motion through the entire performance. Much of the forward drive and overall compositional structure might be attributed to their use of pulse. Even in a drummerless configuration, they frequently employ a steady, explicit pulse. Crump is instrumental in setting up these sections, either plucking or bowing steady lines, however harmonically static or dynamic. This pulse becomes a springboard for all sorts of fun. At times, Laubrock contributes to the metronomic rhythm with her own steady phrases, allowing Smythe to run wild. Other times, Smythe adds impressionistic embellishments over the bass while Laubrock dances freely about. The tempo is often altered, or discarded altogether in favor of free rubato sections. Any of these rhythmic changes invariably leads to new sections, where different moods take form.

This trio also excels at measuring intensity throughout the performance. They have a superb ability to dial-up tension using subtle adjustments in volume, dissonance, and space. Choosing not to light the powder keg for the effect, they instead opt for subtler methods. In fact, it seems that it’s the quieter moments that feel the tensest. Crump may opt for a slow, scratchy arco drone that is quietly matched by breathy tenor phrases and ebbing piano lines. Volume and urgency swell in carefully measured increments. Nothing is rush or forced. Every note, sound, and phrase feels as if it were meticulously placed there. The result is a fluid narrative that explores both emotional and musical possibilities. It is almost paradoxical how their playing is so tempered yet inspired; tense yet graceful. I should also note the excellent recording quality here, which I feel is requisite for picking up the many nuances to be heard on this record.

Their ability to exact such strong emotions with a restrained sense of playing attests to their near-telepathic communication and intuition. As moods and musical ideas begin to develop, each performer seems to know exactly what to contribute and when. It’s like the cliche, the whole is greater than the sum of its parts. The end result is nothing short of beautiful. Channels is a dynamic, cohesive and lyrical story - one “written” by three of today’s most creative voices in improvised music. And they somehow make it look easy.