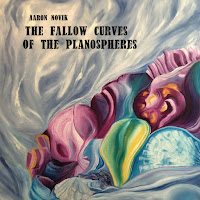 Aaron Novik may be known best by readers of this site for his radical, brilliant 2012 album Secret of Secrets. Earlier this year, Novik released a bold statement showcasing his puckish, punk aesthetic, a compilation of material from five EPs he planned to release over the following months. The Fallow Curves of the Planospheres was a mindbending experience, tracking Novik’s experimentation in different, simultaneous directions. The result is not unlike Ben LaMar Gay’s Downtown Castles Can Never Block the Sun, as Novik challenges listeners’ expectations by swapping lineups and conceptual material song by song. Before I go too far in overselling the difficulty of listening to it, just know that The Fallow Curves of the Planosphere is a extremely fun record. I took my time settling into it, with the understanding that “Ballroom of Lost Faith” (from The Hotel of Thirteen Losses) told me almost nothing of the final EP, as it lead into edited tracks from O+O+ and No Signal. As a teaser of what was to come, they admirably gave away little, while the subtle disjointedness of the album settled into a welcome discomfort.

Few experiences were as surprising as hearing the final EPs as they were released throughout the year. Take, for example, the differing lineups of each: The Hotel of Thirteen Losses has Novik solo on clarinet and bass clarinet, augmented by field recordings. On Rotterdam, he has a sextet, with Kasey Knudsen on sax, Dina Maccabee on violin, Marie Abe on accordion, Lisa Mezzacappa on bass, and Jamie Moore on drums. Novik has a quintet for Berlin, with Mezzacappa, Kyle Bruckmann on oboe and English horn, Crystal Pascucci on cello, and Jordan Glenn on “found object percussion.” O+O+ features the largest group of the series, a septet, with Mezzacappa, Matt Nelson on tenor sax, Evan Francis on flute, Mark Clifford on vibes, Tim Bulkley on drums, and Michael Coleman on piano. For No Signal, Novik plays A clarinet, with Jeremiah Cymerman on Bb clarinet, and Ava Mendoza and Matt Hollenberg on guitar.

Based on the lineups alone, it may not be a surprise that No Signal was my personal favorite, with its absorbing, unique sound world. Cymerman and Mendoza are among this blog’s favorites performers, brilliant and Berlin is a close second, with the great Bruckmann and Pascucci playing some excellent tandem lines, accentuated by Mezzacappa and Glenn’s excellent counter-improvisations. Mezzacappa is simply incredible throughout the series, one of the finest contemporary bass players, and she and Novik share a knack for inspired and slightly mischievous inspiration. Pulling from references to what, on paper, might be incongruous sights and sounds, Novik and Mezzacappa both make deliriously entertaining music. And together, their work across Berlin, Rotterdam, and O+O+ is simply fantastic.

I recommend the full set of albums, including Fallow Curves, for each is its own self-contained unit, and the journey from one to the other is delightful trip worth taking again and again.


All are available on Bandcamp: