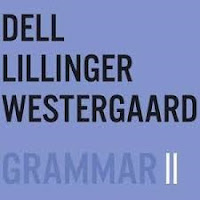 Christopher Dell (vibraphone), Christian Lillinger (drums) and Jonas Westergaard (double bass) have released the predecessor of their new album six years ago. But this doesn’t mean that they haven’t cooperated since then. In the years between these two releases they’ve recorded an album with Johannes Brecht on electronics (Boulez Materialism), for example. Additionally, Dell and Westergaard are also core members of Christian Lillinger’s projects Grund and Open Form For Society. Grammar II is now, according to the musicians, intended to shift the boundaries of experimental music and document the progress of the trio. Like Grammar I (gligg Records, 2013) the new album combines new classical music with improvisation. The pieces are presented on four levels and especially the influences of Morton Feldman and Pierre Boulez become obvious.

Those who know the three musicians as mad wizards on their instruments will be surprised at first. On "Duration - Structure 1“ each tone is set next to another one in an almost pointillist way, the sound spaces are opened very wide, bass and drums respond to every single sound of the vibraphone and vice versa. The structure of the piece slowly evolves, creating consonant chordal patterns and sonic ghost lights that are reminiscent of sphere music. The piece is a wonderful web of textures that ebb and flow, expanding and contracting and finally flowing exhaustedly into “Duration - Structure 1I“, where the density of the composition increases dramatically. Now the music is much more pronounced, the piece clearly shows the emergence of musical concepts through structural frameworks. Tiny melodies blossom again and again, but basically there is a strong focus on harmonies and rhythms here, as if a rhythm section was bored by backing their soloists. So they get rid of them in order to start working consistently on the rhythmic framework instead and exhibiting their results consistently. “Duration - Structure III“ is the track which displays influences by Pierre Boulez’s “sound proliferation“ philosophy. The musicians replace musical themes with structural, harmonic cells. These cells are created through minimal parameters like intervals or rhythmic units, first there’s often some kind of a reduction, but only to let these structures grow exuberantly. The whole track is a juxtaposition of open chords, wild runs, complex rhythm shifts, zig zags, and bumpy stops and goes. Finally, “Duration - Structure IV“ is like a summary of the previous three pieces. In a weird way, it also reminds me of a highly complex heavy metal piece which is played by an acoustic trio.

Once again - like many Lillinger projects - all this may sound a bit intellectual and bloodless. However, one does not only hear abstract structures, but due to the intensity of the musicianship, the structural strictness is always superimposed with musical emotions, physicality and plasticity. The music the trio creates is not just self-referential, but highly communicative. In spite of being really tight its of a floating lightness as well. Highly recommended.

Grammar II is available on double vinyl and as a CD. You can buy it from the label or from Christian Lillinger’s bandcamp site.