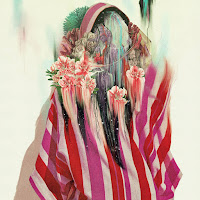 Ghosts was truly a welcome surprise. I have been following the Dutch duo Dead Neanderthals for years now. The band’s core, Otto Kokke on sax and René Aquarius on drums, has remained constant in personnel, but has transformed the project from a spazzy, blow-until-your-eyes burst act to a group focused on long, intense siren-sounds overlaying a steady, thudding percussive rhythms. The intensity is still there, but it is more focused than on their earlier efforts.

This transformation has taken place incrementally over the a few years and many releases. Some, such as the pivotal Body Horror and Polaris (both released by Utech in 2013), grabbed me right away. Much of the band’s work in between those releases and this one, however, has seemed like a study of extended tones and drum repetitions, sometimes in collaboration with other musicians (Nick Millevoi, Colin Webster, others). Although some of these albums really work (such as Worship the Sun), many give the impression that these guys have a big vision that they are searching for but have not yet realized. Ghosts might be that realization.

The two tracks on Ghosts, aptly titled “Bone Hill” and “Death Bell” deploy many of the same ideas as the band’s earlier releases. There are loud and tempestuous. It is often difficult to figure out if Kokke or Aquarius provides the propulsion. Both, members of the group, however, are slightly more restrained than on previous efforts. This is not quite the free blow-grindcore hybrid characteristic of Kokke’s and Aquarius’ early work. Instead, it is relentless, almost punitively so, but measured. It peaks just a few seconds into the first track, then transforms that peak into a panicked plateau.

Ghosts also sounds fuller than a lot Dead Neanderthals’ earlier work. Some of this is a result simply of better recording and mixing (cheers to Martin Wolterink) that abandons some of the punk-rock (or maybe Arthur Doyle?) ethos that fed the band’s first few EP’s. Much, however, also comes from the addition of Scott Hedrick on guitars and keys. Although the music here is that much more propulsive, that much more inspired than some of the digital-only releases that paved the way to it, it also has that much more sonic density. And that density makes it not just heavy, but also bright. Eerily, almost terrifyingly bright, but stunning nonetheless.

Ghosts is available on digital and LP, accompanied by some beautiful, surrealist digital collage artwork by Pierre Schmidt.