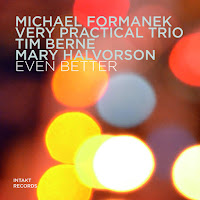 It was only a matter of time for this group, with Mary Halv orson and Tim Berne, to happen. Before they all appeared on Formanek's Ensemble Kolossus release, they'd had their fingers in each other's recorded pies. Formanek and Berne have worked since Bloodcount in the 90s, and the bassist and Halvorson make up two thirds of Thumbscrew. Berne has worked in small groups with Bill Frisell, Nels Cline and Marc Ducret so the genre bending Mary should be an intriguing guitar foil for his insistently probing syncopated lines. Also it's almost impossible to imagine their paths having never crossed in venues like The Stone or at festivals. So clearing busy schedules with other working groups led to this.

I was fully expecting to like this just fine for an initial statement from three musicians I enjoy, while still wanting it to have the more-than-the-sum-of-the-parts synergy that comes from extended interplay as a working group. This disc is truly Even Better than that; a fully mature sounding statement as a collective entity. Formanek composed all the pieces, except for Scott LaFaro's "Jade Visions" closing cut, surely with knowledge of how the lines would sound as played by the other two. And how each has the ability to maintain the rhythm in a drumless trio giving free rein for the others to venture hither and yon while veering away from a chaotic mess.

Things get off to a rousing start on "Suckerpunch" with Formanek and Halvorson playing a stop and go syncopated uptempo line before Berne enters with a slower counter melody which Mary joins up with before they go their separate ways, none stating the original motif but not straying completely away from it either, before ending it with a satisfying return. "Two Pillars" might refer to the saxophonist and guitarist framing the opening with parallel long tones. Berne has long had a haunting tone effectively employed on slower tempos and in this setting it's nicely augmented by the guitar through parallel fragile clear notes, or smeared with delays or shimmering reverb laden chords.

But kudos to the nominal leader (there's no "apostrophe s" as his group, per se, but he's obviously top billed) for these compositions enabling a blending of distinct talents while ebulliently holding up his end on bass. I've been a fan of Formanek for around thirty years but lately he seems to have reached a new plateau. In the last year and a half I saw him with Thumbscrew and a duet with his son, Peter; in both settings his bass was more aggressively out front, in a good way, than I'd previously recalled. But seeing the Elusion Quartet with Tony Malaby, Kris Davis and Ches Smith, where they transformed the compositions on their disc into something different and better, was the real stunner. Hopefully the Very Practical Trio can find time to tour and try to do something similar to this already very enjoyable release.