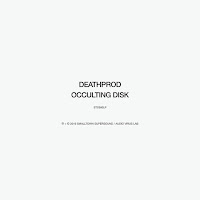 At once gorgeous and punishing, Occulting Disk, the new record from Deathprod is nothing short of astounding. It's been quite a number of years since the Norwegian electronic musician Helge Sten -- the man behind Deathprod, and core member of Supersilent -- graced us with a set of his otherworldly sounds. And here it is; we sit and listen, in awe.

Otherworldly is in fact somewhat misleading, however. Sten's electronics, a collection of many elements which he refers to as "Audio Virus," possess simultaneously a synthetic sheen and an organic soul. This is music from and for the heart, indisputably. It's no wonder that this particular project originates from a personal, existential place for Sten, encircling questions regarding a politically and spiritually destitute modern world. Specifically, Sten describes Occulting Disk as an "anti-fascist ritual." To my ears, I can interpret this is two ways. For one, the music itself has a message. It is searing, purposeful and triumphant. There is obviously no text, but in this music I hear defiance and resistance, and I also hear real love. It feels like quite a feet to impart, with clarity, messages and pointed meaning within obtuse, experimental, instrumental music, but Sten achieves this.

A second reading though, is that this is music to inspire resistance, standing-up, humanity, compassion and love. And I think it succeeds in doing this in a number of ways. Sten's musical worlds are emotionally stirring, with two clear modes of evocation. On one side, there are tracks like "OCCULTATION 3" and "OCCULTATION 7" that float through, hovering around a central drone or harmonic space, nearly quiet. These are pensive, deeply thoughtful moments. Places to ruminate. Moments to consider what's around you and within you. To inspire introspection and meditation -- active though, definitely not passive.

This contemplative space is facilitated by the unique durational quality to Sten's compositions (just one of the several "atypical" qualities of his music). Sometimes pieces go on longer than you'd think, sometimes they end sooner. Sometimes you think a piece is over but it's not quite. Other times a piece ends, only to start up again somewhere very similar with the next track. Often tracks start with a period of real quiet that makes you wonder if your stereo has turned off. They are expertly crafted liminal environments. Don't check your watch while you listen, it's a much more rewarding experience to not know where you are. All of this amounts to a pull or strain at the otherwise space of serenity-- this, of course, feels like what truth is.

Then, unmistakably, there are tracks like opener "DISAPPEARANCE/REAPPEARANCE." If we're breaking the music on this record into two camps of existential inspiration, this song is firmly of the flip side of things that inspires strong, assertive action! This one sounds like unknown nation's lost anthem. It's screaming, crying and speaking directly at someone or some-thing. The piece is a confounding marvel. It's made up of, essentially, two elements, each of which take their turns stabbing through the mix. It all plays out like a strange conversation, with prodigious space between strong, forceful utterances. For a little over two minutes, it's a monologue of sorts -- "speaker one" casting out a cavernous belly squall, flanked by breaths of silence. Eventually, speaker one is answered by "speaker two" -- a far away yet right in front of you foghorn. which sounds of course like a foghorn yet like no other foghorn I've heard. These two talk for about five more minutes, eventually collapsing atop one another. It's quite something to be a spectator here. It feels like a private world you've just secretly happened upon...

And that's another thing about OCCULTING DISK. This music feels at the same time familiar, yet like nothing you've ever heard. The aforementioned feeling of happening upon a private world pervades the entire record. These pieces feel like perfect, ready-made universes, as if they always existed, or that Deathprod summoned them out of our collective consciousness into physical, aural existence.

I realize I've not actually talked much about specifics musically, but in a way that makes sense because it's hard to put into words. A few more thoughts though: witness the peak of it all with the terrifying "BLACK TRANSIT OF JUPITER'S THIRD SATELLITE," one of only two tracks not entitled in the numerical "OCCULTATION" series. This is over twelve minutes of body shaking horror, surely in the more confrontation oriented type of music on the record (see "DISAPPEARANCE/REAPPEARANCE" as previously described, or "OCCULTATION 6"). Elsewhere, hear the wailing bliss on "OCCULTATION 1," a robust yet gentle anthem in it's own right. This one sets the tone for the rest of the numbered pieces that follow. "OCCULTATION 2" feels like a ringing out of any detritus built up from what preceded, while "OCCULTATION 3" feels like the needed comedown/calm before the next storm. I could go on -- just listen to it.

This is a monumental work (it would have been atop my year end list had I gotten to it before January 1) that I worry will go woefully under-listened to. It's speaking truth to power, for one, and on top of that it's hard to classify. It sits between improvisation, avant-garde, electronic music, etc, in a way that may prove hard for some to dive into. I fear that not only might this not find enough listeners from folks with ears accustomed to challenging music, but by those with fully different musical taste. Though alienating and harsh sounding (at first glance), its my belief that there's an access point in this music for anyone. It's a vital document of and for this moment in time -- subversive and confrontational, but with a mind for resilience and unity, and a vision for a world beyond the one we know.