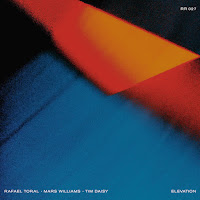 Clicks, bird calls and chirps, toms and brushes, slow and then hastening, a subdued anxiety leading to a throatier sax and growled trills over snare rolls spilling out round the edges. That Rafael Toral
plays “feedback, modified amplifiers and electric oscillator” gives his dialogue with Mars Williams’ saxophone an electric edge that toys with the notions of sound, tonality, and lead instrument. In addition to “saxophones,” Williams is on “toys & busted-up autoharp.” They make a whole lot of something from nothing, grabbing sounds from the detritus of noise making; not turning it into monument – more like the feeling of the air in a room turning into weather, or a quick-sketch of some delectable with sprinkles slowly turning edible

Throughout these three long-form pieces, Tim Daisy’s percussiveness allows the other two musicians a rhythmic floor over which they can work, but if your ears shift focus (especially on the first two tracks), the percussion becomes the all, and the richer noises turn out to simply ornament the drier pulses of the drum kit. At times we’ve got for the most part three percussionists playing at different registers with different toys. The third track becomes almost a lullaby, like those urban night noises over tinnitus that keep you awake at the edge of sleep slowing coalescing into morning birds and car alarms when you realize you’ve finally slept. Incidental music for the free noise fan.

Portugal-based Rafael Toral, whose aesthetic this record most embodies, explains his approach as heavily influenced by Zen, trumpeter Sei Miguel and John Cage, identifying the “defining features in [his] practice and thinking [. . .] as space, silence, unpredictability, agency, responsibility and acceptance . . . .” I prefer Elevation to Toral’s Live in Boston (with Chris Corsano) which as a more stripped down version (drums & feedback noises) has less sonic surprise built in.

Mars Williams has performed with Peter Brötzmann, Ken Vandermark, and various rock bands. With Paal Nilssen-Love’s trio, Boneshaker on Thinking out Loud or Fake Music, Mars Williams’ playing is a mix of fiery and meditative. Here on Elevation, Williams uses his saxophone less as an expressive extension of intention, and more as another miscellaneous toy adding playful, inventive, thoughtful incursions into the feedbacks and silences.