From Wolves To Whales 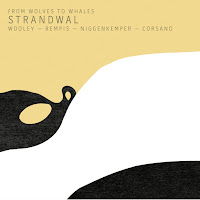 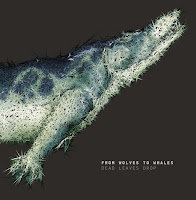 Wow! Two new albums by the "super group" "From Wolves to Whales", which consists of Dave Rempis on sax, Nate Wooley on trumpet, Pascal Niggenkemper on bass and Chris Corsano on drums. No need to introduce these musicians to you. You get the fireworks their names suggest.

If anybody's interested in the band's name, it might come from the recent discovery about the ancestry of whales which can be traced back to wolves. You can read more about the evolutionary findings here.

From a musical perspective, the band's concept is comparable. I'm not sure whether the "wolf" represents jazz itself, or the jazz of Ornette Coleman, with its similar line-up, which evolved into this highly energetic free power band that could be considered as "whales". Interestingly, wolves live in packs and whales live in pods. Wolves communicate by howling, barking, growling and whining. Whales use vocalisations that are sometimes called songs (as in Charlie Haden's "Song of the Whales"). Their songs have been described as "probably the most complex in the animal kingdom".

Be that as it may, the quartet's core music is unmistakably jazz, with all the definitions that go with it, and often with references to the Ornette Coleman Quartet, with its nervous branching out of sounds, but its equally centering around some core concepts, including the rare melodic phrases that emerge from the high intensity ferocity of the band, or in the sometimes boppish agreement among the bass and drums to keep a steady rhythm. Yet despite this legacy and respect for the "free jazz tradition", the four musicians make today's music (or tomorrow's), a real collective effort with a level of freedom that must sound even audacious to Coleman.

The two albums were recorded during a European tour in 2017. "Strandwal" is a double CD, with performances given in the Netherlands at De Pletterij in Haarlem (yes, the origin of Harlem in New York), one day before the concert in Belgium in the city of Antwerp (yes, the origin of Antwerp in New York). "Dead Leaves Drop" is a vinyl LP consisting of two long pieces, "Pakicetus" (the "whale on land") and "Ambulocetus" (the "wolf in the water").

Both albums come highly recommended, because both performances are excellent. The improvisations are long, some almost as long as half an hour, but there's nothing too long or superfluous. The band's wonderful instrumental artistry combined with their shared coherent vision on their music makes you listen with full attention, captivated by the collective power of these four individual voices. The sound is raw, fierce, energetic, with some quieter moments or even gentler moments to create contrast and tension. There are moments of absolute madness, but the band manages to stay close to the core of its developing material, it evolves, and may change between land and water, but it keeps its inherent characteristics. They howl, they bark, they growl and whine, but above all, they sing. As a pack, as a pod.

Free jazz at its best.


The entire concert in the Netherlands can be viewed below.

Really like Strandwal, so much so that I gave it as a Christmas present to a longtime listening buddy. I hope they can coordinate schedules to tour this year in the Midwest.