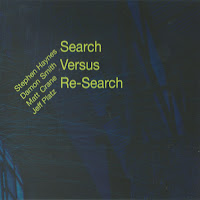 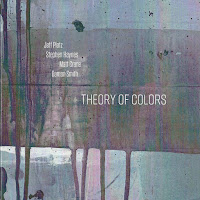 The group now known as Search Versus Re-Search is evidence of just how formidable a working band can become when improvisational energies rightly align. With membership drawn from across New England, the quartet of guitarist Jeff Platz (Boston), bassist Damon Smith (until recently Boston), cornetist Stephen Haynes (Hartford), and drummer Matt Crane (Providence) is a union of four highly sensitive and generous players. The band underwent a flurry of activity in 2018 and 2019, playing a number of shows throughout the Northeast and quickly recording two albums.

Theirs is music full of fine detail and supporting gestures, centered on convergence rather than confrontation. In the liner notes to Theory of Colors, Joe Morris aptly notes the group’s “mastery in the improvisation of form” and throughout both albums, the band tends to favor framing and occupying spaces and moods over counterpoint or trading lines. Despite the short time between records ( Search Versus Re-Search was released on CD in January 2019, followed by Theory of Colors in September), in some respects Theory of Colors already sounds more assured, and it moves away from the longer improvisations of Search in favor of a handful of shorter statements, some as brief as one minute.

Smith’s rich bass tone emerges as something of a centering force across both albums, melding his arco rasp with Haynes’ low sighs on “Bonshō,” or flirting with a swinging groove as he strides along Crane’s ride cymbal on the jazz-inflected “This All Is Everything.” Haynes, focused for many years now on cornet, continues to develop his masterful use of mutes, voicing smeary strokes and brassy textures that erase the idea of—or really, the need for—discrete notes. He whispers and wheezes before more enthusiastically joining an excellent colloquy between Platz and Smith in the unhurried “Midnight and Noon,” the conversation selflessly highlighted by Crane’s careful brushwork. Platz in particular is fascinating in this context, which is unbounded in a way not found in his previous work. Here, and on tracks like “Elevational View” and the title track from Theory of Colors, he dips into curious pedal effects that highlight new aspects of his playing.

There’s something else important that this group touches upon through its allusions to Josef Albers, its fixation on color, and its eventual incorporation into Crane’s visiting artist residency at the Haystack Mountain School of Crafts in Deer Isle, Maine: improvisation as an educating force. If there’s a unifying thread running through this group’s work, it’s the idea that, for musicians and listeners alike, improvisation is both a searching working-through and a broader means for reflection and instruction. Through sound, the quartet embodies Albers’ lesson to “note that balance, proportion, harmony, [and] coordination are tasks of our daily life, as are also activity, intensity, economy and unity.” In each meeting, Platz, Haynes, Smith and Crane commit to an ongoing educational practice in which they not only learn the changing contours of how to create music together, but in doing so, teach the rest of us about music in dialogue with the other arts, about the spaces we listen within and the communities we inhabit, and ultimately, something about our own expectations and sensitivities.