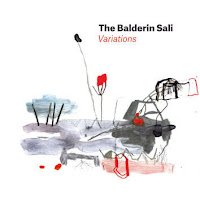 The Balderin Sali refers to the Helsinki venue for the latest staging of an on-going festival of improvised music. The Soundscapes Concert Series was founded by saxophonist Harri Sjöström as a meeting ground for Finnish and Berlin-based musicians in Berlin in 2013. Next was a 2016 follow-up in Helsinki with this third iteration, chronicled over a two-CD set occurring over two nights in September 2018. There are 11 musicians present here, spanning generations of improvisers, many of them operating on the Helsinki-Berlin connection that Sjöström defines.

Look a little closer though and it’s a more intimate gathering than all those nationalities might suggest. There’s a Berlin quintet called Up and Out that includes Sjöström, Wachsmann, Bauer, Gordoa and Narvesen: the group, sans Wachsmann, turns up among the sub-groups here, while in another configuration the quintet appears with Parker in place of Gordoa. Mureddo and Kujala are both associated with Helsinki’s Sibelius Institute, leaving only the well-traveled Parker and Tramontana as relative outsiders. The result, then, is at once a celebration of the international language of free improvisation and the very special relationships that exist between Sjöström’s multiple musical communities.

Though drawn from concerts spread over two days, the two CDs have a forceful beginning and an equally powerful conclusion, each an extended orchestral segment including the full complement, with 11 segments in between that range from duos to quintets. It’s unnecessary at this point to sing the praises of many of these musicians, who together embody much of the collective genius of international improvised music.

Suffice to say, the known figures here (consider just Sjöström’s extended collaboration with Cecil Taylor) have set standards for a music that is consistently empathic and intrepid, acutely aware of nuance and gesture while evolving and redefining macro- and micro forms. The larger ensemble dialogues here reach back five decades to the Globe Unity Orchestra (including its microcosm, the Schlippenbach trio, with two of its members present here).

The music is also as alive as the last and next five minutes. The sequencing creates fine contrasts, setting an almost electronic-sounding abstraction of Gordoa, Hauta-aho, Narvesen and Parker before a blustering salvo from Tramontana, Lovens and Mureddu. The second track on disc 1 is a duet of Sjöström and Kujala, the third track on disc two a duet of Parker and Kujala, and one has to ask: what was this music before the quarter-tone accordion, a question that had already occurred during that first opening orchestral swarm when sudden flashes of microtonal keyboard reeds lit up the ensemble in an utterly fresh way. The duets announce the arrival of a significant new musician bearing an instrument equally unknown. Veli Kujala not only provides a novel field and foil for those master saxophonists, he also contributes brilliantly to other sub-groups, including a lightly busy trio with Lovens and Hauta-aho and a quartet that adds Mureddu’s comparable keyboard vision. I’m left looking forward to the possible keyboard trio of Kujala, Mureddu and Gordoa, three musicians to whom I was introduced on these CDs

The collected proceedings are frequently surprising, testifying to the vigor and range of contemporary improvised music, an inclusivist vision in which genre and tonal identities are old floor markings increasingly worn away in the persistent joy of the dance.
Paul on Monday, January 27, 2020
Share