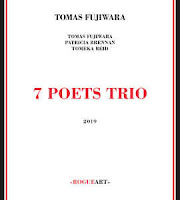 “I’d like to tell you as little as possible about this music...”  (Fujiwara, liner notes)

Tomas Fujiwara knows how name his bands – The Hook Up, Triple Double and now we have the wonderfully titled 7 Poets Trio, another unique release from Parisian label RogueArt.

Opening with a rainfall of brushes, 'Blend' meticulously builds and blossoms as we try to place which instrument in the trio could be producing the sound of resonating water glasses.

The gracing beauty of Tomeka Reid’s cello draws out contextual atmosphere and a beckoning narrative but hold on – is that an electric piano now?

As the piece develops over its 18 minutes and segues into KP Mexican musician Patricia Brennan’s vibraphone becomes fully discernable in its acoustic rendering. Fujiwara’s patterns of evolving drumming slowly move to the fore – ever present, yet so subtle in their evocation – a whirring sewing machine of meshed, percussive complexity suspending the trio’s living tapestry of sound. As bowed cello moves to pizzicato – and with surprising bounce – Tomeka takes a solo of sorts as her lines cross-weave the intricate interlocking vibe-chimes and revolving drum shapes. These pieces were specifically conceived with the trio’s sound-personalities very much in mind.

'A Realm Distorted/Questions' leaps into action with a stop/start rhythm full of two-note stops, imbuing a kind of oblique chamber funk. Ms Reid stealth-walks her bass line then moves into a free-cello squall before the trio descend into full chiming breakdown, to near silence, finally arriving at an almost nursery rhyme-like theme – Ms Brennan vocalizing along as she explores her full tonal palette – before Tomeka closes the piece by artfully drawing melodies in the air.

Fujiwara opens 'Cruisin’ With Spencer' with a carefully constructed solo drum foundation, effortlessly mapping out a rolling sound web for Brennan to adorn with a shimmering of clear vibraphonic tones.

'Gentle Soul' begins as a more abstract affair – a trio improvised opening of drum skin, rustled papers, bowed strings and digital vibes. Pulling free of this textural mesh is a plaintive cello refrain of such warmth that it almost becomes a hook – one could dance or cry to this music.

At six minutes – and replete with a false-stop – Ms Brennan tumbles back in with a now distorted sound, turning her vibraphone into a 70s electric organ or flanged electric guitar (maybe even a touch of wah pedal in there) before a short coda ties up the last threads of this moving tapestry.

It is no surprise that every piece here is a dedication and Fujiwara has succeeded in creating a uniquely orchestrated sound for this clearly personal project. There is such generosity, restraint and warmth in both the writing and drumming that lucidly showcases such a diverse array of sounds from the other musicians – at times there could be 7 Poets at play – but always held tightly together with Fujiwara’s subtle percussive interlacing.