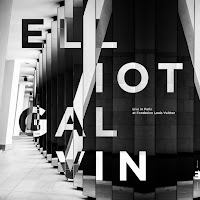 Live In Paris At Fondation Louis Vuitton ​is a solo release from Elliot Galvin. Galvin has prodigious talent which early in his career maybe lacked direction but not now. His confidence and experience have grown to such an extent that he sets his own path and it is for others to follow if they are able. Galvin plays entirely improvised, an aspect which in itself displays the confident place from which he is now playing. His quick thinking and understanding of two part arrangements, whether in harmony or as a counter-intuitive but musically linked exploration shows his musicality and ability to think in the moment. He has built himself a reputation as one of the rising stars of European jazz and improvised music. He plays solo and in trio, and is a key member of Mercury Music Prize nominated band Dinosaur, and a free jazz duo with saxophonist Binker Golding. This album assures him of his place not as a rising star but as one who is set for the long haul.

For four albums Galvin’s critically acclaimed trio with bassist Tom McCredie and drummer Corrie Dick has been the main focus and they have achieved many great things. Elliot has proved he has quite the gift of keyboards, along with an extensive arsenal of electronic and extended acoustic sounds.

On this recording, we hear Elliot Galvin just on piano - no electronics, no echoes, no tinkering - and it is a revelation in every sense of the word. Stripped back, laid bare, the talent before the listener is personal, and nothing short of brilliant in its creativity, lyrical story-telling and musicianship.
The iconic Fondation Louis Vuitton building is a new cultural centre designed by American architect Frank Ghery adjacent to the Jardin d'Acclimatation in the Bois de Boulogne of the 16th arrondissement. Ghery’s extraordinary glass sails float above the surrounding parkland. This live recorded concert was described as being completely spontaneous, free improvisation, an approach that matches the free-flowing lines of Ghery’s architecture. That Galvin's strengths have moved beyond arrangement and keyboard exercises is now crystal clear. Each of the tracks demonstrates Elliot Galvin's ability to improvise to a very high level, and to express his musical ideas into compelling and moving forms in the instant.

I asked Galvin about his feelings recording the album and he told me, " I didn't expect this concert to become an album. I always wanted to make a solo piano album, but it never quite felt like the right time. After I finished this concert and listened back to the recordings it just felt right, everything fell in the right place and I wanted to share it with people because it sounded like me. Solo, improvised piano is where I feel most at home, it's where I started when I was 6, just making things up and seeing what I could create. In many ways it feels exactly the same now."

After initial applause from the audience 'As Above' begins suddenly and without fanfare as Galvin launches into a thunderous opening run, followed by series of gentler 4s over chords and a beautiful openness comes into the music, the notes clear with definitive space between them, each placed with the exactitude of an expert. It is beautiful, it is changing and it is definitely challenging for the player. Galvin makes good use of the entire keyboard and offers changes in rhythm and tempo yet there is a linkage throughout the entire piece. The quietude of the middle section contrasts with the opening and ending. What comes across in complete clarity is the quality of the piano which Galvin is playing. Apparently this is a Steinway of considerable age and quality, here possibly having one of the greatest workouts of its life and the tone is wonderful. The thundering section which follows the central respite is followed by another change, this time open strings and echoing pedalled notes. It is a beautiful way to open the CD.

'Time and Everything' begins as a quieter study with the (just in tune) top notes of the piano being worked effectively over reverberating low notes before there is a single repeated note which heralds the onset of a more melodic line. This evolves into almost classical progressions and a diversion of right and left hand which is staggering in its complexity, yet delivered with the practiced ease of a master. The second half of this track is pure beauty.

'Coda' is short, sharp and rather sweet as Galvin thumps out chords in logical sequences on the piano with extended and shortened related gaps, showing his timing as well as his playing is well honed. There is that touch of madrigal style which is often part of Galvin's style inserted again as well.
'For J.S.' is fun, lively and enjoyable. Galvin uses the spaces in this piece almost as much as the notes which are played, creating an effective and enjoyable effect. There is a lovely section where both hands are running up and down scales in almost perfect opposition so they come together, then veer apart yet it is all somehow connected. In the middle section there is a clever run with the right hand taking a break-neck speed down the keys, to be taken up seamlessly by the left hand so the full extent of the keys are covered as a single run. The final section is darker, heavier and atmospheric.
'Broken Windows' is eerily charged at the beginning with slow, gentle higher end notes which are put together in pairs and triplets to impart a sense of relaxed playing before the piece develops, and the sharps give it that sense of glass broken, pieces falling and shattering, out of the solid frame and onto the ground, drifts into minor keys adding to the effect. A clever and well delivered piece with great atmosphere and nuance.

'So Below' is simply a clever, dexterous delivery of great improvised music. It swings from light to heavy, offers thunderous lower notes with trinkling lighter upper octaves and numerous bangs, plucks and slides over the keys at different points. A highlight of the album - but not the only one.
This entire album is another revelation from Elliot Galvin - this time not only of a great pianist but also of a natural improviser, weaving patterns, creating different landscapes and taking the listener with him on the lyrical journeys he creates and travels through as he plays. What is striking is the silence of the audience and the sheer business of the piano as almost without knowing it the ears are assailed first with lightness and joy and next minute by tumultuous hefty chord lines of volume and strength. Listening to this musician you are taken someplace else, lifted and driven - which is what great music does.

If all this was not enough this was not enough, I was trying to think what was so different about this recording and it hit me - Galvin has introduced an element of emotion and feeling- he includes soul, almost pathos. The recording has caught a moment in time when Galvin was at his improvising best, and he shared this with the listener - and it is a good thing.

This CD is impressive; it shows the maturity of this young musician who feels as if he has been on the scene for a long time but is still relatively young. The sense here is that Galvin is a musician who will enjoy a long career in jazz, the only barrier to this is being if he himself decides not to. Enjoyable, hugely engaging and such an impressive performance. Elliot Galvin, in his quote to me said this sounded like him. Well, I am glad he has done this solo recording and revealed just part of the potential he has. For once, words fail to express the wonder felt at this music.

Insightful review of a fantastic record! Hearing it, I feel the same way I did when I first heard Craig Taborn. Already one of the greats!