Catching up with Ernesto Rodrigues is a futile pursuit. I had been planning this post for a few weeks at the end of 2019. I aggregated a slew of albums, a non-methodically chosen most of his Creative Sources releases over the last few months of the year. And now, just a few weeks later, he has already outpaced me. Hence, despite my best efforts, I am still falling behind.

Nevertheless, here is a review of some (and just some) of Rodrigues’ final releases of 2019. 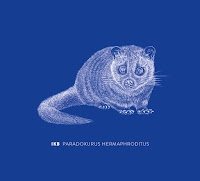 Compared to many of his recent releases (i.e. Lisbon String Trio) and some of the other releases in this review, Paradoxurus Hermaphroditus is a return to form for Rodrigues. Although it is not quite as quiet as the most minimal of his releases, it maintains the subtleties and delicate clicks, clanks, and breaths that Rodrigues started exploring decades ago. This is particularly notable as Paradoxurus Hermaphroditus was recording live at CreativeFest XII in 2018. Unlike other amelodic, nonidiomatic music like this, Paradoxurus is slight music magnified, rather than a wide-ranging sonic engulfment. It is about fine textures and miniscule ripples. It is about small sounds and diminutive tones. Even in such understatement, however, it is still about expansivity and big movement. This is all the more remarkable given the line-up of 20 musicians. (In that, it reminds me the Insub Meta Orchestra with more independently moving parts). This is music that begs to be played loud (if only to be audible) and commands close attention. And, it is one of the most consistently engrossing albums I have heard from Rodrigues lately. 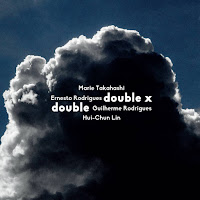 Especially for an irrepressible musician, arranger, and label owner like Rodrigues, I imagine one must expend a lot of energy just keeping things interesting. Much of that energy seems dedicated to the single-minded quest to push the boundaries of the music, creating pieces that oscillate in that sweet spot just a hair too abrasive for Wandelweiser and much too Wandelweiser for a large swath of the rest of the listening public. Some must also go into imagining and staging new configurations of musicians seasoned in this type of lowercase music. It seems a small world, but, somehow, Rodrigues and his collaborators still find new contours to explore.

A string quartet of two violas and two cellos, double x double is just one of these working ensembles. From the first deep bows of the first track, “Dawn Burglary,” the listener knows he is in for a very different experience than the much larger ensemble on Paradoxurus Hermaphroditus produced. The music here is dark and clear, rather than almost inaudible restive. The tension is unmistakable. The melodies are sinister, blending a romantic sense of harmonic development and sway with a postmodern feel for interlaced droning tones and a postmodern fascination with all things non-conventional. (By now, of course, much that had been unconventional has been incorporated into and refined by the Rodrigues/Creative Sources repertoire.) Think: contrasting dynamics of prolonged shimmering and scratchy whispers and sharp, percussive strings, barely audible clicks, wooden creaks, and slide-whistle glissandos. A fine showcase of the potentialities of a modern, unorthodox string quartet. 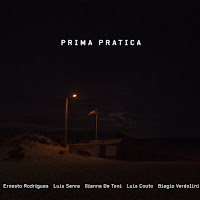 Slow-motion deconstruction of bassline supported by crackles, chimes, plucks, and hollow metallics. Light wafts of half-melodies. Delicate percuss and saxophone clucks. Softly but restively screeching strings. Speaks to both the common ideas and discipline of the group dedicated to discovering the minute, dissonant idiosyncrasies of the musical moment and extending them deep into time. A second can be an instant or a prolonged meditation on a single bent tone, scraped surface, or, more often, combinations of minor events.

What makes this unique in this bunch is the primary role played by Gianna De Toni’s bass. It frequently stands out in its depth and clarity and seems the linking element between prevalent atmosphere of strange sounds (Luis Senra’s contorted sax huffs, Luis Couto’s altered guitar, Biagio Verdolini’s bag of homemade devices, and, of course, Rodrigues’ viola) and more traditional and recognizable musical elements. 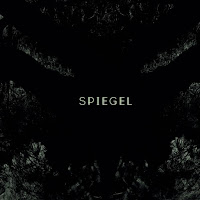 Recorded at the CreativeFest XII (as was Paradoxurus Hermaphroditus), Spiegel is one of several recent releases that caught a Rodrigues ensemble live. The sound quality, however, hardly suffers, and that is an extreme complement for music like this. One can still hear the slightest squeak, most breathy hiss, and faintest rumbling. These are set against forceful but restrained piano, sparse single-note cello pizzicato, and other mysterious loud tones. In the sense of contrast (rather than movement), this is potently dynamic. Although there is a rawness to this music, there is also a clear refinement. Noise is not made to simply to fill space, but to continue a musical thought or transition to a new one. The layers bend and blend into each other, creating a quiet wall of sound. Yet, somehow, this stops short of the ambient sound-sculpting that it so often tempts. Two long tracks of subtle, mysterious, and masterful music captured in its purest live form. 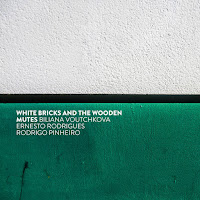 Of the albums in the round-up, this is the one I had anticipated with the most eagerness. Two violas and a piano? Lisbon-scene stalwarts Rodrigues and Rodrigo Pinherio with Biliana Voutchkova of Blurred Music renown? What’s not to like?

Another live recording (though from a 2017 date), White Bricks and the Wooden Mutes promised to be bold (and understated) and forceful (but subtly so). This assumption may have encouraged me to listen harder or concede to it certain intentionality. That says, it is nevertheless a standout among this compelling set of releases. One viola turns to drones. The other, clicks plucks. Pinherio’s piano responds with metallic chords, flight runs, and rapid interior pizzicato. The music then glides into some of the most active and spirited exchanges I have heard Rodrigues engaged in. This approaches free jazz at its clunkiest and most energetic. But, it does this briefly. As with Rodrigues’ quieter releases, the group focuses on shaping sound out of a dialogical morass. It concentrates on dynamics, rather than melodicism or unfettered ebullience. Still, counter to my expectations, understatement and near-silent nuance are the exception, though they do appear at brief moments in the valleys. Much of the rest is composed of the layers of whistling notes, frayed crackles, nervous scrapes, and controlled dynamism that have come to characterize Rodrigues’ projects, albeit here at comparatively amplified volumes. It is an odd combination for Rodrigues, but a wholly satisfying one.

I agree with Colin, Nick. Very well done. By the way, I tried the same in 2017 (though I didn't write any reviews) - with the same result. I particularly like the larger formations released on Creative Sources.

There was another one released yesterday which sounds pretty sweet:

Thanks for these reviews, Nick. This will keep me busy.

Thanks, all. Sometimes it is hard to distinguish Rodrigues' projects from one another unless they include an additional strong personality who is able to steer the project in a surprising direction. Otherwise, it is all nuance.
That Book of Spirals album is alluring. I had intended to take a brief break from Rodrigues after writing the review, but he is not making that easy.