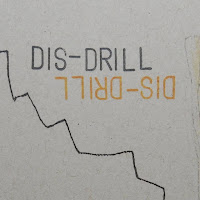 The Denley/Marien set, “Drill Bit,” drifts through a collection of extended techniques for the instruments involved. Like much of the music these musicians make, it’s less overt conversation or call-and-response and more communication through changes in tempo, space, and volume on a substrate of timbre (with glimpses of more traditional tone). A quick ticking rim and skittering skins from Marien is met with an undulating resonant hum from Denley that transitions to a draining suck as the ticking becomes more urgent; spit play accompanies brushes like branches against the window; bowed metal with blown drumheads; swaths of breath and waves of brushes. These timbres most often begin and end with each other, rather than transitioning into each other, and can be separated by hard resets of silence, creating the feeling of a collaged environment. Sometimes the tempo, space, and volume build together towards a crescendo in these episodes before breaking into the next timbre, but most often the dynamics are relatively constrained. It’s usually quiet, but there’s not much silence beyond the timbral breaks.

The Martel/Müller set, “Dirt Bill,” follows the same dynamics and structure. But Martel’s pulsing string rubbing and percussive body tapping is met with Müller’s wood wick candle fluttering and hydraulic release exhalations; Martel’s creaking with Müller’s wheezing; Martel’s scratching glass with Müller’s rubbing balloons; and Martel’s viola sounding like a harmonica with Müller’s trombone sounding like a didgeridoo, recalling a John Hillcoat western score with Warren Ellis (which I’m sure someone in the Australian audience also heard). Martel only utilizes pitch pipes a couple times but to amusing effect towards the end of the track, sounding off a simple, almost childlike non-melody while Müller creates a kind airplane ambiance before making the pitch pipes sound like a harmonica too.

The two tracks on Dis-Drill are well-played, especially considering they’re first meetings, but want the concept and resulting structure, complexity, and cleverness that makes other echtzeitmusik recordings landmarks in contemporary music. It’s still a worthwhile listen, a promising springboard for future collaborations between these two sets of musicians, and a solid selection for the third release from Müller’s mamü music, after solo trombone and The Monophonic Havel .
Dis-Drill is available digitally and on cassette.