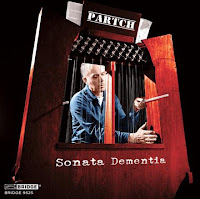 Harry Partch, an early microtonal composer who advocated for Just Intonation and composed on a 43-tone-to-the-octave scale, remains a difficult musician to comprehend. An outsider’s outsider, Partch’s work is often grouped with composers such as Morton Feldman, Karlheinz Stockhausen, or Terry Riley, and in some ways these similarities hold water. While his inclination towards dense rhythmic patterns, prolonged dissonance, and at-times unpredictable shifts in tempo might be familiar, Partch’s music consistently baffles the uninitiated because of the unique instruments he built for his compositions. With names like “The Ptolemy,” “Bloboy,” and “Spoils of War,” Partch’s instruments were often adaptations of marimbas, pianos, or guitars reconfigured to be better suited for just intonation rather than equal temperament.

These instruments are on display in Bridge Record’s newest Harry Partch release, “PARTCH: Harry Partch, Sonata Dementia.” Recorded by the PARTCH Ensemble with instruments built by the composer, “Sonata Dementia” is the third release by Bridge in their ongoing Harry Partch project. This release recovers works that were either significantly altered later or that were never performed in Partch’s lifetime, including the title piece, recorded for the first time for the album. Equally exciting is a rediscovered live recording of Harry Partch performing “8 Inscriptions From a Highway Railing in Barstow, California” in 1942 — Bridge claims it as the only recording of Partch performing his own work live.

In his 1949 book titled Genesis of a Music, Partch writes at length about the powers of the human voice in a way that might be surprising when thinking of a largely instrumental composer. He says, “By mere control of the lips, mouth, tongue, palate, glottis, and diaphragm under emotional stimulus, the human voice is ready to express all the feelings and attitudes which the cumulative centuries have symbolized in words and poured into the dictionary … This bottle of cosmic vintage is the endowment of all of us.” These claims hang heavy over the works on “Sonata Dementia,” as each of the album’s 21 tracks features either a spoken introduction or what could only be called a Partchian libretto.

In these spoken interludes, the wit and dry humor that mark his compositions shines through. At the conclusion of the opening track “Ulysses at the Edge of the World (A Minor Adventure in Rhythm)” a skeptical inquirer asks, “So you say that your name is Ulysses, that you’re wandering around the world … tell me, sir, have you ever been arrested before?” The rest of “Sonata Dementia” unfolds from this demeanor. At times irreverent and shocking, at other times melancholic and atmospheric, “Sonata Dementia” commands the listeners attention and respect. To listen to this record is to allow oneself to be transported into the universe as Partch saw it; full of mythic figures prancing across 1940s California as the sound of the Chromelodeon snakes through the air.
Paul on Monday, March 16, 2020
Share