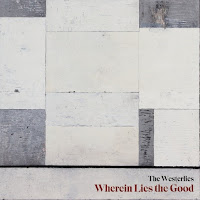 Although the Westerlies formed an integral part of Seattle’s dynamic jazz scene during the early 2010s, after relocating to New York they’ve gotten more attention for their guest appearances than their own recordings. Trombonist Andy Clausen started the group in 2011 with fellow trombonist Willem de Koch and trumpeters Riley Mulherkar and Zubin Hensler (the latter since replaced by Chloe Rowlands). Working with artists as diverse as Vieux Farka Touré (Touristes, 2015) and Fleet Foxes (Crack Up, 2017) revealed their wide-ranging stylistic palette, although partnering with Dave Douglas on his superb Little Giant Still Life (2017) may have been their most career-shaping move to date. Even so, their latest release, Wherein Lies the Good, should go a good distance toward burnishing their credentials as a chamber-jazz ensemble of the first rank.

Admittedly, the “chamber jazz” label is a bit out of place when describing the Westerlies’ music, as like their Seattle-based colleagues Wayne Horvitz and Robin Holcomb, these four horn players delight in creating cross-fertilizations between the jazz, folk, and classical traditions. Indeed, the Westerlies released an album of Horvitz’s material in 2014, Wish the Children Would Come on Home; and Holcomb’s stunning fourteen-minute “Wherein Lies the Good” serves as the centerpiece of their current release, with resonant tones of Appalachia mixing with Baptist hymnody and echoes of minimalism in a sprawling, Americana-infused journey. Holcomb’s piece was first issued on her Little Three solo release from 1995, and it’s characteristic of her iconoclastic pianism; here the Westerlies bring it to life wonderfully, utilizing the unique textures of their two-trombone, two-trumpet lineup to add even more emotional depth to the music.

The album’s other pieces are generally short, two to three-minute vignettes, several of which draw from the American spiritual tradition, courtesy of pieces from the Golden Gate Jubilee Quartet. “Born Ten Thousand Years Ago” and “Travelin’ Shoes” are up-tempo gospel rave-ups, while “Do Unto Others” offers a taste of New Orleans swing and “Remember Me” is a bluesy lament. The group brings a good deal of panache and verve to these pieces, although for this reviewer’s money the Westerlies are at their best on the more ruminative fare. Along these lines a Charles Ives piece, “In the Mornin’,” is simply gorgeous in its four-part harmonic simplicity, while Chloe Rowlands’ “Laurie” has a somber lyricism that is instantly affecting.

While all four players are prodigious talents with impeccable technique—listening to their fluid lines and subtle syncopation on “Chickendog and Woodylocks” is a case in point—the Westerlies’ talent ultimately lies in blending their four voices in ways that accentuate the beauty of the music, as Wherein Lies the Good makes clear. This is an excellent release from a fine working ensemble soon to embark on its second decade.